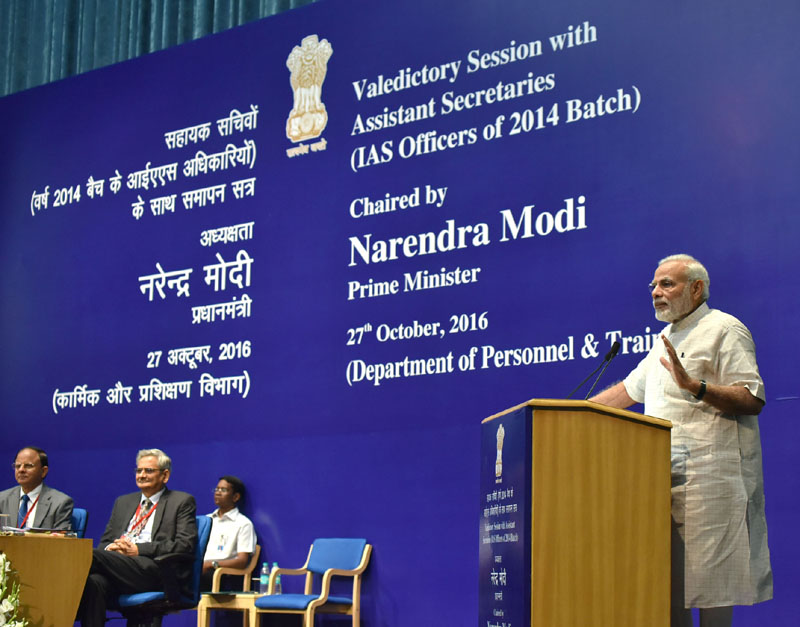 The Prime Minister, Mr. Narendra Modi interacting with IAS officers of the 2014 batch during their Valedictory Session as Assistant Secretaries, in New Delhi on October 27, 2016.

New Delhi (PIB-GR-TYP-BIN): As part of their Valedictory Session as Assistant Secretaries, IAS officers of the 2014 batch made presentations before the Prime Minister, Mr. Narendra Modi on Oct 27.

8 selected presentations on various themes of governance were made by the officers, on themes such as DBT, Swachh Bharat, e-Courts, Tourism, Health and Satellite Applications in Governance.

Speaking on the occasion, the Prime Minister complimented the young officers, for their in-depth presentations. He said the attachment of IAS officers as Assistant Secretaries with the Union Government, had been envisaged as a mechanism that would bring the best out of the blend of youth and experience. He said that the results as presented today, gave him satisfaction that this vision was well on the road to realization.

The Prime Minister urged the officers to inculcate team spirit, and work towards breaking silos, in whatever capacity they serve. Stating that politics should never override policy, the Prime Minister urged the officers to use two touchstones to help them in their decision-making: (a) that the decisions should never be counter to national interest, and (b) that the decisions should not harm the poorest of the poor.