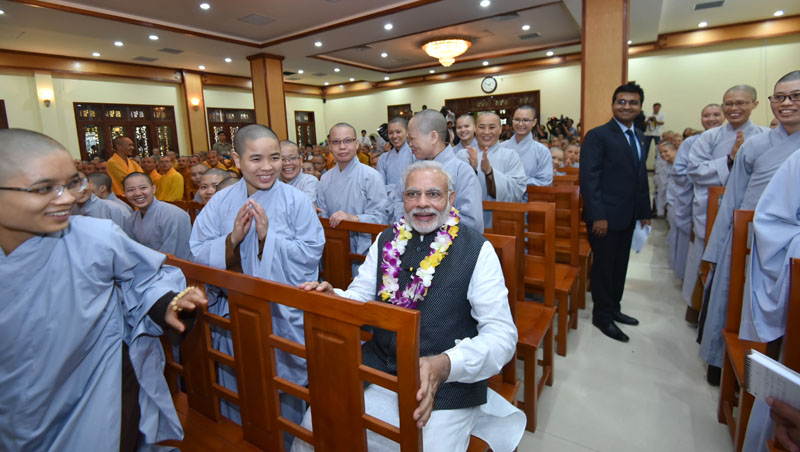 The Prime Minister, Mr. Narendra Modi at the Quan Su Pagoda, in Hanoi, Vietnam on September 03, 2016.

He offered prayers at the Sanctum Sanctorum, and was given a rousing reception by the monks.

Interacting with the monks, the Prime Minister said that he is fortunate to visit the Pagoda, and recalled that India’s first President Dr. Rajendra Prasad had visited this Pagoda in 1959.

Noting that links between India and Vietnam were 2000 years old, the Prime Minister said that while some came to make war, India had come with the message of peace – the message of Buddha, which has endured.

He said the world must walk on the path of peace, which brings happiness and prosperity. The Prime Minister said Buddhism took the sea route from India to Vietnam, and therefore Vietnam has received the purest form of Buddhism. He said he has seen a glow on the faces of the monks who have been to India, and a great curiosity on the faces of those who wish to travel to India.

The Prime Minister invited them to visit the land of the Buddha, and especially Varanasi, which he represents in Parliament.