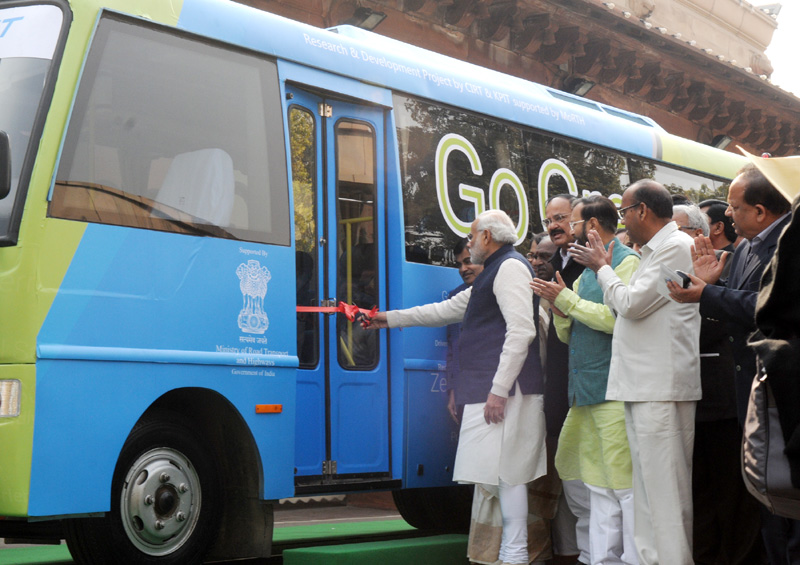 The Prime Minister, Mr. Narendra Modi attends the function for Demonstration of Retrofit Electric Bus, at Parliament House, in New Delhi on December 21, 2015.

New Delhi (PIB-GR-TYP-BIN): The Prime Minister, Mr. Narendra Modi attended a function at Parliament House On December 21, for the unveiling and demonstration of a retrofit electric bus. The bus has been converted from a diesel bus to a battery-operated electric bus. This is an initiative of the Ministry of Road Transport and Highways, to provide clean, pollution-free transport for Members of Parliament.

The Prime Minister briefly visited the bus, and handed over the key of the bus to the Speaker of the Lok Sabha, Mrs. Sumitra Mahajan.

Speaking on the occasion, the Prime Minister said that the environment had been a topic of discussion for long, but in recent times, the impact of damage to the environment is being felt by the common man.

The Prime Minister recalled the recent CoP-21 Summit at Paris, and talked about two significant initiatives taken there. One of these was “Mission Innovation,” launched jointly by US, France and India, with the help of the Bill and Melinda Gates Foundation, to work towards development of green technologies. The other was the creation of the International Solar Alliance of countries blessed with abundant sunlight. The Headquarters of this alliance will be in Delhi, the Prime Minister said.

In this context, the Prime Minister appreciated the efforts of the Union Minister for Road Transport and Highways, Mr. Nitin Gadkari, in the launch of this bus. The Prime Minister exhorted entrepreneurs to work towards producing cheap and efficient electric batteries in India, which could spur a drive towards clean public transportation.