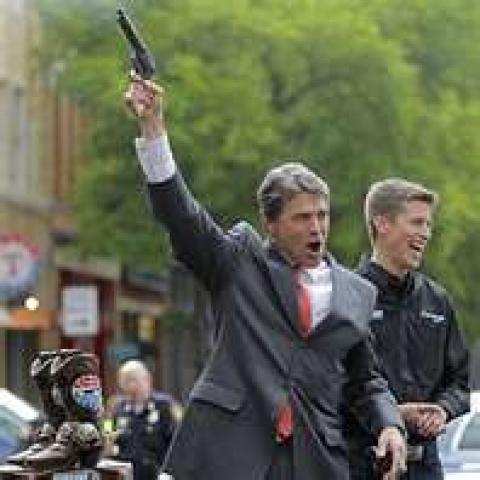 The liberal mainstream media jumped all over Rick Perry today for speaking his mind and telling the truth.  Printing money for political advantage is treason, especially if it’s done to influence a Presidential election.

But Rick pointed his finger at the wrong guy.  Ben Bernanke juiced up the money supply in 2008 when no incumbent was running.  He did it just to avoid a financial crisis and bail out his friends at Goldman Sachs.  ‘Easy’ Al Greenspan, on the other hand, did it to much greater effect just before the 2004 election, setting the stage for the real estate bubble and the re-election of George W. Bush.  Talk about treason.

I have been blaming ‘Easy Al’ for years for assuring George W. Bush’s election in 2004 but no one listened.  People treated me like a crackpot.  [Bush stole the 2000 election, so techncially he wasn’t re-elected] .  I just couldn’t put my finger on the nature of the crime until now.

As you will recall, Alan Greenspan dropped the Federal Funds rate to 1% on June 25, 2003 and held it there for a full year, pumping up the money supply leading up to the 2004 election.

That is where a true leader like Rick Perry comes in.  Rick is the kind of man who through pray and divine guidance can articulate for the masses that the Chairman of the Federal Reserve is not above the Constitution and could and should be punished with death, if he prints money to support a sitting President.

The next issue that I hope Rick will take up is the destruction of the Jefferson Memorial.  How can there be a momument on the Mall to an atheist who sympathized with the French?