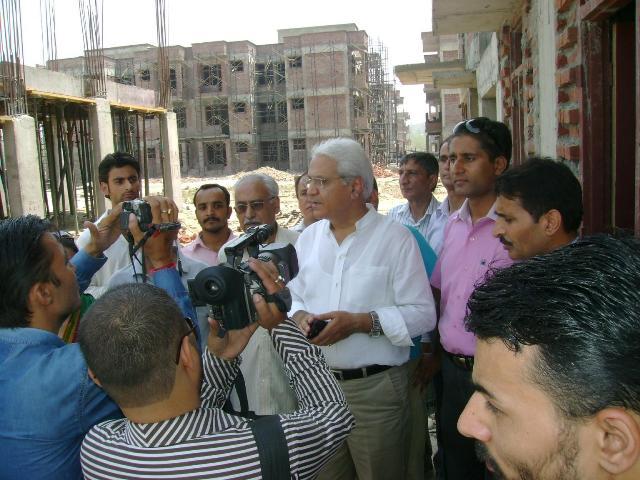 Jagti (Jammu),June 26 – Pt.Moti Koul, the President of Worldwide organization of Kashmiri Pandits, All India Kashmiri Samaj (AIKS) informed that there are approx.37000 KP migrant families registered at Jammu, Udhampur and other places out of which more than 7000 poor families living in rented accommodations are facing numerous problems. He urged the Govt. to widen the Jagti project to accommodate these seven thousand families after proper survey.  Besides this the families who have lost their members due to individual militant killings and carnages like Sangrampora, Vondhama, Chatisinghpora, Hugam should also be provided the accommodation on the priority basis.

After visiting the whole area Pt. Moti Koul urged upon the Govt. to expedite the construction work as the scheduled time of the completion of the quarters has already expired.

He also urged to provide the alternate business establishments like shops, Pvt.schools at Jagti to those camp dwellers who have established their own business to make their both ends meet during these years of displacement and also to other displaced traders.

He demanded that “Their losses should be taken into consideration because they have to face one more displacement”.

Mr. Koul  while speaking to media at Jagti said that while allotting these quarters such a mechanism should be evolved so that the priority should be given to camp dwellers and the complete transparency should be maintained without any political interference.

Mr. Koul felt that the provision kept for educational institutions and Health centers are not sufficient to meet the demands of those families who are going to be accommodated at Jagti. These institutions should be constructed keeping the displaced population into consideration. Proper arrangements for security need to be kept in consideration also.

Mr. Koul said that Jagti being a temporary phase of rehabilitation, the Government should make efforts for the permanent rehabilitation in the valley.