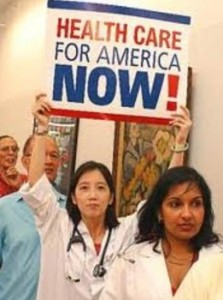 Nurses in Charlotte protest against opposition to the Affordable Care Act in 2012.

Before the Patient Protection and Affordable Care Act took effect, insurance companies could arbitrarily cap and cancel families’ benefits, or refuse to cover kids just because they were born with a pre-existing condition. Before the law, 105 million Americans had lifetime caps on their care, including 10.4 million African-Americans.

Up to 129 million Americans under the age of 65 have a health condition that could make it hard to find their own insurance. Before the health care law, some insurance companies spent as much as 40 percent of premiums on administrative overhead like marketing and CEO bonuses.

Today, the health care law has put an end to some of the worst insurance industry abuses.

The law is making sure that families’ insurance is really there for them when they need it by keeping insurance companies from taking advantage of medical consumers, especially those who are desperate and dying for their own selfish benefit.

Lifetime caps have been banned for good. This is something that really pisses the private for profit health insurance companies off!

Already because of the health care law, no insurance company can deny coverage to the up to 17 million children and infants with so called “pre-existing” medical conditions like asthma and diabetes.

This is something the health insurance companies wanted to oppose.

If an insurance company wants to raise rates by 10 percent or more, they have to justify their actions. Before the didn’t have to do that and nobody said anything about it, not even state and federal regulators and consumer protection agencies….

One hundred eighty million are now protected against the worst most horrendous insurance abuses in America, like denying health care to the sick, because they are sick, charging excessive premium increases and lifetime caps on the amount of care a patient can receive, and soon will be protected against “gender discrimination”. Being a woman should not be considered a pre-existing medical condition…

“Before the health care law, insurance companies were free to openly discriminate against women. In most cases the states, like North Carolina gave them a free pass”, says Fred Kraft of Charlotte.

“Women could be charged as much as twice as much than men of the same age and demographic for the same insurance coverage”, says Ms. Wong of Charlotte.

“Women could be denied coverage because of a pre-existing condition such as cancer or even having been pregnant. Insurance company executives should have been charged criminally for doing such things to women which would endanger their health and safety”, says Mr. White of Charlotte.