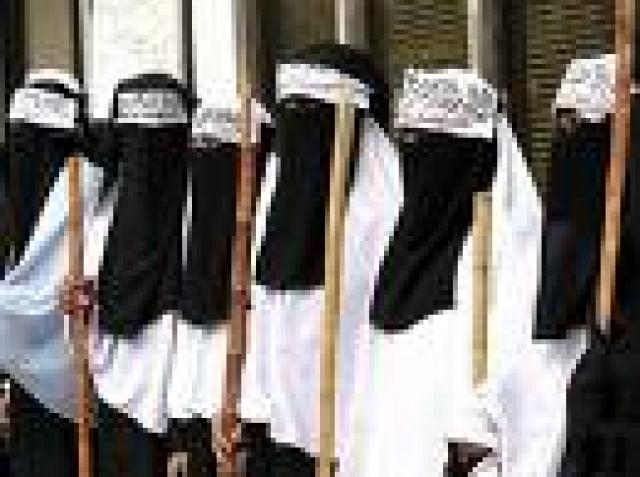 Saeed Minhas
ISLAMABAD: Pakistani officials have finally registered a criminal case against the administration of the Lal Mosque in Islamabad for kidnapping seven Chinese, six of whom are women and two male Pakistanis from a Chinese-owned massage centre in the heart of federal Capital on Friday night.
Federal interior ministry is also planning to order a police action for release of the abducted Chinese and Pakistanis from the captivity of Lal Mosque premises. The National Assembly, which is in session for the 2007-08 budget, also resonated with the issue and government finally was heard asking the opposition to allow use of force against the pro-Taliban mosque. Any action on the mosque is likely to result in exchange of fire and loss of lives, as more than 4000 women and 3000 male students are at the mosque’s seminary and are believed to be heavily armed besides having the trained jihadis amongst their ranks. Opposition believes that this mosque is sponsored by the intelligence agencies to befool the western world and prolong the General Musharaff’s rule in guise of this threat.
China, a strategic ally of Pakistan, seems concerned on this and its ambassador in Pakistan called on leader of opposition in the National Assembly, Maulana Fazalur Rehman, who believed by many as godfather of Talibans in the country. Official spokesperson of Pakistan’s foreign office, Tasnim Aslam told the private channels that Pakistan is equally concerned and is in constant touch with the Chinese Ambassador on this issue.
The male and female brigades of pro-Taliban Lal Masjid and Jamia Hafsa abducted nine persons, including seven Chinese, in an operation on Friday midnight. Those abducted are seven Chinese, six of them women, and two Pakistanis. Riding in three vehicles, the religious students raided a Massage Centre at House No 17, Street 4, Sector F-8/3. They overpowered three Pakistani guards posted at the centre after injuring them.
Later, they entered the building and ordered the Chinese men and women present there to accompany them. On refusal, the students thrashed them and forcibly took them to the Jamia Hafsa compound.
The religious students accused the abducted people of rendering un-Islamic and unlawful services. When contacted, ASP city Kamran Adil confirmed that nine persons, including seven Chinese, were kidnapped by the Lal Masjid brigade. He said the Rescue 15 earlier received the information about the kidnapping of five persons. However, later it was confirmed that the abducted people were nine.
It is the first time that Lal Masjid has held foreigners hostage. There is a strong possibility of an Army operation against the Lal Masjid brigade this time as the victims include nationals of a friendly neighbour of Pakistan.
Earlier in the day, the Khateeb of Lal Masjid, Maulana Abdul Aziz, told the TV channels, gathered around the mosque that these people have been taken into custody for counseling so that they should not run immoral business here and should not provide sex to Pakistani males in the name of massage. He said that all the abductees are safe and would be released once counseling is done and they repent their deeds.
Lal Mosque has become hub of Talibans in the heart of Capital of Pakistan and the government has never showed the intention of storming the premises, which they have admitted is becoming a nuisance and causing humiliation for Pakistan in the world.
Last month Lal Mosque vigilantes had abducted four policemen guarding the mosque and released them after four days. They even threatened to commit suicide attacks if the government tried to storm its premises, where not only male but female students are residing and getting Islamic education.
Filed under: World
Share Tweet Pin G Plus Email
previous article: It’s time for Sex Education
next article: Nine, Including Six Chinese Women, Released by Pakistani Militants