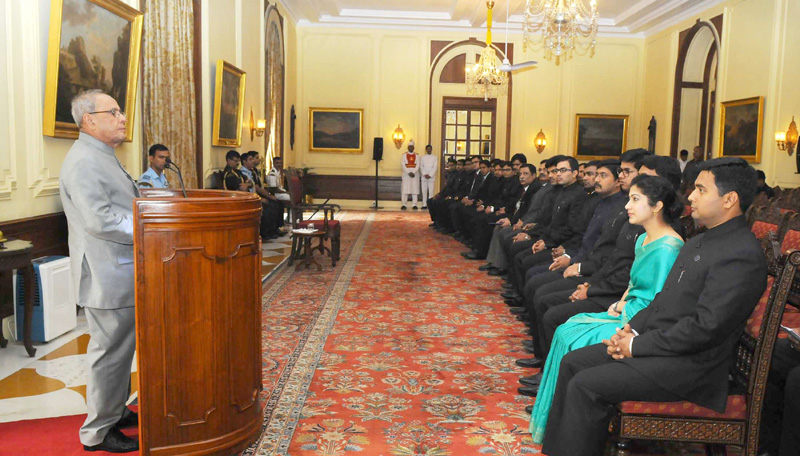 The President, Mr. Pranab Mukherjee meeting the probationers of the Indian Defence Accounts Services (IDAS) of 2013-14 Batch, at Rashtrapati Bhavan, in New Delhi on November 10, 2015.

Challenges And Opportunities In Long Career

New Delhi (PIB-GR-TYP-BIN): A group of probationers of Indian Defence Accounts Service (2014 and 2015 batches) called on the President of India, Mr. Pranab Mukherjee at Rashtrapati Bhavan on November 10.

Speaking on the occasion, the President extended heartiest congratulations to all the young officers for having cleared the civil services exam which is recognized as one of the toughest competitive examinations. He welcomed the young probationers to Government service and assured them that there will be no dearth of challenges and opportunities in their long career ahead.

He said that the canvas, scope and breadth of exposure and responsibility that a career in Government offers, and that too at a relatively young age, is an experience and opportunity unlike any other. He said that he was sure that the 24 week professional training at the National Institute of Financial Management, followed by another 28 week stint at their service academy which they undergo will acquaint them with the intricacies and nuances of the Department.

The President said that the Service that they are joining is the core of the Defence Accounts Department. Established several years ago, this Department was until 1951 known as the Military Accounts Department. The Department renders finance related services and is mandated with the task of ensuring financial propriety and accountability in the Ministry of Defence. It handles the payment & accounting functions, pension management, internal audit, budget management and the financial advice function for the Armed Forces and the allied establishments i.e. the Ordnance Factories, Coast Guard and Boarder Roads.

He said that the Department has the crucial responsibility of guaranteeing financial propriety, probity and integrity in all transactions. The increase in defense outlays requires that all of them remain abreast of the latest techniques in financial management and deliver sound financial advice in a timely and efficient manner.