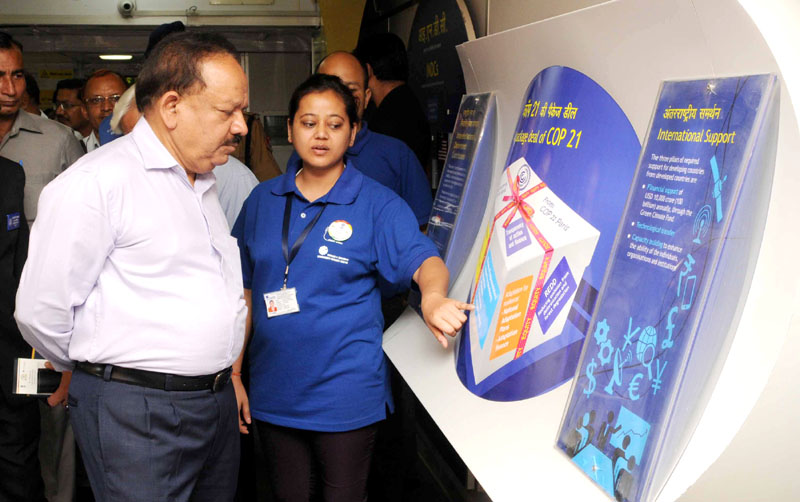 New Delhi (PIB-GR-TYP-BIN): Union Minister for Science & Technology and Earth Sciences Dr. Harsh Vardhan said the problem of climate change can be tackled by adopting alternative sources energy and science should play an active role for the purpose. He was speaking in the “Science Express” which he inspected at the Safdarjung Railway Station in New Delhi on October 17.

The Minister witnessed the entire exhibition on the train and also spoke to new persons. Dr. Harsh Vardhan instructed his ministry officials to develop more cost effective and efficient electrical lamps and other solar devices for the benefit of people. The Minister also said that people should be made aware of importance for conserving and adopting alternative sources of energy and this train is one of the measures for popularizing the science, which is most crucial for improving living standards. Senior officials of the ministry accompanied him as witnessed the entire exhibition on the train.

Secretary, Department of Science & Technology urged the instructors to be lucid as they explain technicalities to the children visiting the train.

The Science Express is an innovative science exhibition mounted on a 16 coach AC train which has been custom-built for Department of Science & Technology (DST) by the Indian Railways (IR). Science Express is now being redesigned on the theme ‘Climate Change’ for this edition which began from New Delhi on 15th October 2015. It will be now run as as ‘Science Express–Climate Change Special (SECCS)’. It will travel across India, initially for about 7 months, halting at 64 locations spread over 20 States, covering about 18,000 km. The exhibition will convey a strong message on Climate Change and will also be a good opportunity to generate dialogue and discussion.