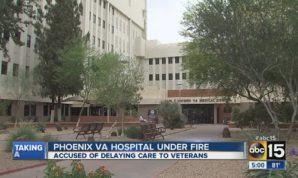 Problems at the VA much bigger than secret wait lists.

Like most of America, I have been watching and listening very carefully to how all this is developing surrounding the Phoenix VA hospital and the deaths of 40 veterans who were put on secret wait lists.

As with most things in Washington, the people in charge in Congress completely miss the point and are single mindedly  focused on finding those responsible or they can blame for the situation – not on finding solutions to fix the problem.

This is not to say that those responsible for the formation of secret wait lists or who contributed to the delay in care that caused the deaths of those 40 veterans who died  waiting to see doctors should not be held accountable – they should be. But the problem is much bigger than that.

The problem, of course is that our VA health care system is underfunded, understaffed and overburdened by the sheer number of veterans and their dependents coming into the system from over 12 years of continuous wars n Iraq and Afghanistan. Not to mention those injured in war and who are still living from WWII, Korea, Vietnam, Grenada, Panama and those who served honorably on active duty. There are millions of them.

Nobody that I know of is seeking to address that issue. Not the president who has shown a remarkable lack of leadership on this issue and not the Secretary of the VA or the Defense Department, Congress…

Until at such time as they do, the blame game will continue.