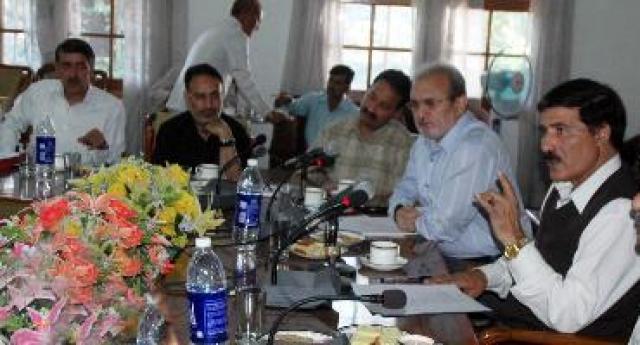 Srinagar,October 26 (Scoop News) – Reiterating that dialogue is the only effective means to sort out issues, the Advisor to Chief Minister  Mubarak Gul on Tuesday called upon separatist leaders to come to table for putting across their viewpoints in a democratic way.

Addressing a public meeting here,  Gul said conducive atmosphere is building up towards resolution of problem, adding that all stake holders need to shun intransigence and facilitate in evolving a roadmap acceptable to all.

The Advisor said that Chief Minister  Omar Abdullah has been advocating political initiative to address issues concerning . He said 8-point political initiative announced by the Centre has thrown a good opportunity for working in unison towards restoration of peace and normalcy for good.

The Advisor said that the coalition government is committed to provide all basic amenities to the people especially those living in far-flung areas of the State. He said that it is the endeavour of the Government to facilitate the people with the drinking water, electricity, road connectivity, health care facility and quality education to the student community.

The Advisor said that significant measures have been taken for successful implementation of various developmental and welfare schemes launched by the state and centre governments.

Later, several deputations called on the Advisor and apprised him about their day to day problems. The Advisor heard them patiently and assured that the problems would be looked into sympathetically.