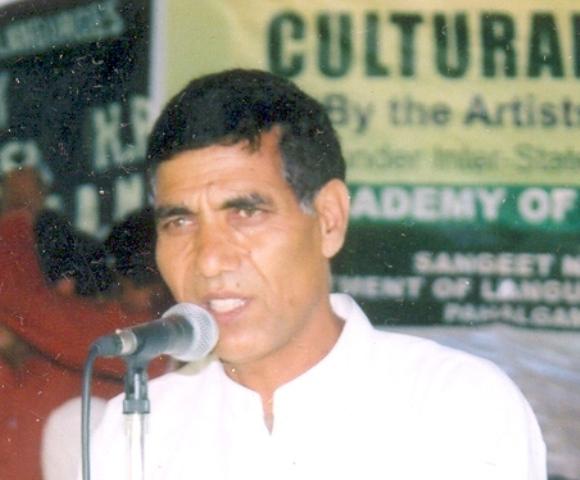 ,May 15  -. Renowned Theatre Director and Actor Ghulam Ali Majboor passed away on Friday at his residence at Village Wathoora in Budgam district. He was 57.

while condoling the sad demise of Gh. Ali Majboor said that he was a legendry figure among folk artists of .

A spokesperson of Acadamy Mr Zaffar said that Majboor has devoted his whole life for promotion of theatre in . Recalling his contribution he  said that Majboor had participated in a number a National events organized by Academy and other institutions and brought laurels for the State. He said when in January 2007 he performed before President and Prime Minister of at both dignitaries were highly impressed by his art as an actor.

Zaffar was speaking in a condolence meeting held here at headquarters  of Jammu and Kashmir academy of Art, Culture and Languages at Lal Mandi here this afternoon. Other  who spoke about the contributions of Majboor  includes Haroon Rashid, Mipam Utsal, O P Shrma, Ashraf Tak, Dr. Javaid Rahi and Iqbal Malangami.

Ghulam Ali Majboor was born 17th of December 1952 at Hanji Gund Wathoara in a famous  Mahagunee Gharana of  Kashmiri Folk Theatre. He had inherited the thousand years old legacy with regard to Folk-Theare of .

He had directed more than 200 plays and was A grade Artist of All Radio, Doordarshan and of Art, Culture and Languages.

Recognizing his efforts for promotion  of Folk and Performing Arts of  Kashmir Ghulam Ali Majboor  had been awarded and honoured by a number of National and State Organization including Union Ministry of Information and Broadcasting, Government of India, State Academy of Art, Culture and Languages, University of Kashmir and Education  Department of  Government of Jammu and Kashmir.

As a Writer he had written More than  50 full-length plays and had contributed a number of writings to Kashmiri language and literature. As a columnist  he had remained associated with a number of Daily, Weekly, fortnightly and monthly papers and magazines.

He was a Teacher by profession and remained associated with of Art, Culture and Languages as “Visiting Senior Artist”. He was also member of various high level committees being constituted by State and Centre Government from time to time.

He had also produced more than two dozen documentaries of Folk-Theatres of .