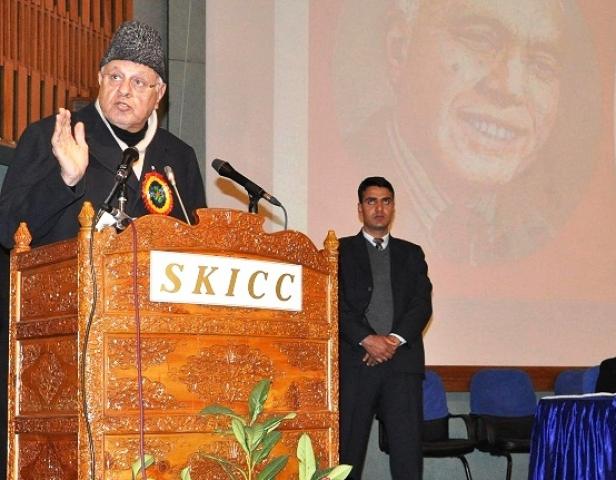 , December 05(Scoop News) – The Sher-i-Kashmir International Convention Centre (SKICC) today celebrated Founder’s Day in connection with the remembrance of Sheikh Mohammad Abdullah who was the founder of this Centre constructed to promote convention tourism in the State.

Union Minister of New and Renewable Energy, Dr. Farooq Abdullah was the chief guest besides Minister for Tourism and Culture, Nawang Rigzin Jora and Minister of State Tourism and Home,  Nasir Aslam Wani were also present.

Speaking on the occasion, Dr. Abdullah said that it was the vision of the Sher-i-Kashmir Sheikh Mohammad Abdullah to construct a Conference hall of international refute where world class convention and conferences could be held which will boost to the tourism activities in the State. He said that SKICC provided boarding, dining facilities to the visitors besides promoted them to visit tourist destination of the valley and purchase Handicraft products and thus promoted convention tourism.

Dr. Abdullah said that we have to create more infrastructural facilities in this sector for attracting more tourists towards State which will provide employment opportunities for the youth and will earn income to the State. He said that youth have to change their mindset of hankering around Government jobs but to explore opportunities in the corporate sector and there is scope for training the youth in hotel management and skill development programme so that can earn their livelihood, he added.

He said peace is imperative for the development and sought cooperation of media in promote the situation of in a better way so that tourists in large number will visit the valley.

Speaking on the occasion, the Minister for Tourism and Culture, Nawang Rigzin Jora said that there is need to attract domestic tourists to the State for which awareness and better facilities are to be provided them and government has initiated various steps towards this. He said during this year a record number of tourists visited the State besides 3,000 delegates visited SKICC, and we were able to organize 168 conferences/meetings which was possible due to the peaceful summer this year. Jora said we must be in touch with tour operators to promote adventure and domestic tourism in the State.

He said to promote tourism we have to encourage meeting, incentives, conventions and exhibition to attract tourists in the state and this year we held meeting with tour operators for promoting adventure tourism.

The Minister of State for Tourism, Home,  Nasir Aslam Wani said that government is striving for the exploring the new tourist spots and creating better infrastructure so that more tourists are attracted in the state. He said that conducting of Panchayat elections was a historic decision by which powers were ensured to be transferred at the grass root level and Public Services Guarantee Act is another decision by which corruption can be curbed to a large extent. He said that government under the dynamic leadership of Omar Abdullah is striving for the overall of development of the State.

Earlier, the guest speaker and tourism expert Sheema Vohra gave detailed lecture on how to augment tourist potential of the state.

The Director SKICC, G.N. Qasba presented vote of thanks.