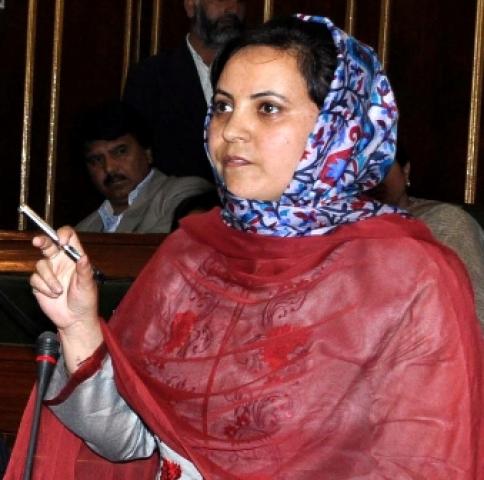 Replying to the debate on demands for the grants the Minister for Social Welfare Mrs Sakina Itoo said that the social welfare department is the most important Department which is connected with the common man and particularly dealing with the welfare of the people who for one reason or the other have lagged behind in the process of development and deserve every sort of help and compassion from the Government.

Giving details of last three years achievements, the Minister said that during the period   there  was  enhancement of Rs.  66 crores in the Plan-outlay and flow of funds under centrally sponsored schemes. She said that during 2009-10 plan outlay was Rs.295.08 crores while as the expenditure was Rs.258.56 crores.

Mrs. Sakina said that for the benefits of the beneficiaries under financial assistance scheme for old aged, widows and handicapped persons

The Minister said that an amount of Rs 131 crore have been spent by the department during financial year 2011-12 which were provided to 2,29,995 beneficiaries of old aged persons, women in distress and 1,23,858 physically challenged persons  in the state. She said that under the National Social Assistance Programme (NSAP) 1,29,000   beneficiaries under the age group of 65 years and above have been covered so far.

Referring to Scholarships to SC,ST,OBC and Minority Students  of the State, the Minister said that Rs.49.93 crores have been provided as scholarship  during the year 2010-2011 to more than 5.39 lac students of SC/ST/OBC, Minorities,  G&B and Pahari Speaking communities  at pre-matric and post-matric levels upto Ph. D level including professional courses.

Highlighting the achievements of the Integrated Child Development Scheme (ICDS) Mrs. Sakina said a project for opening of around 10  thousand additional  Anganwari Centres has been submitted to the Government of India  under new scheme Anganwari On Demand.

The Minister elaborated that more than 28,000 Anganwari Centres have been established in 141 ICDS Projects where around 9 lac women and children have been benefited, which is one lac higher than the previous  years achievement. The Minister said that for the coverage of these beneficiaries, the Department is spending an amount of more than Rs. 240 crores annually which include more than Rs.98 crores on nutrition. In addition to this, there are 457 crèche centres run by Social Welfare Board benefiting more than 11 thousand children with an expenditure of more than Rs1.25 crores, she added.

The Minister said the in addition the department is implementing Rajeev Gandhi Scheme for Empowerment of Adolescent Girls  Commonly known as SABLA and Indira Gandhi Matrivita Saheyog  Yojna (IGMSY).