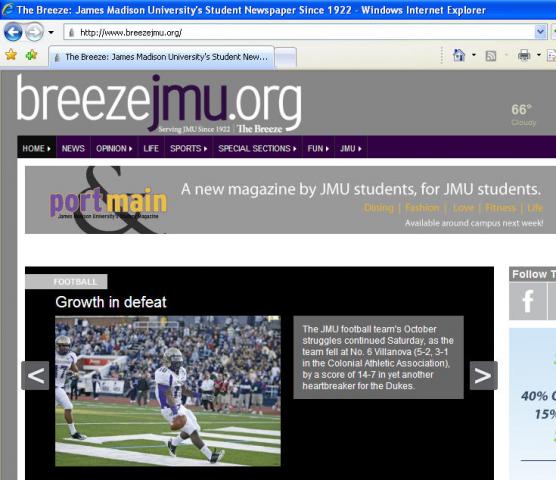 Katie Thisdell is a student journalist, but last April she faced legal pressures that might make even the most experienced editors crack.

It happened because of Springfest, an annual open-air party held adjacent to James Madison University in Harrisonburg.

Springfest traditionally attracts thousands of people, including many JMU students. But last April’s event got out of hand: Riots erupted as party-goers started fires and threw beer cans and bottles at police.

Thisdell is editor-in-chief of The Breeze, JMU’s student newspaper. Her reporters covered the rowdiness, and her photographers took almost 1,000 photos.

Five days after Springfest, the local commonwealth’s attorney, Marsha Garst, contacted Thisdell. She demanded The Breeze’s photos – including unpublished pictures – in an effort to identify and prosecute the violent students.

Thisdell initially declined the request, noting that the newspaper’s policy is to release only photos that have been published.

But then Garst and about 10 police officers showed up at the offices of The Breeze. They threatened to shut down the paper if Thisdell didn’t provide the pictures.

Thisdell reluctantly handed over the photos.

Journalists across the country rushed to support Thisdell and The Breeze. For example, the Society of Professional Journalists sent Garst a letter saying:

“The office of the commonwealth’s attorney has trampled on the freedom of the press by trying to use this media outlet as an arm of law enforcement. In a democratic society, it is vital to have an unfettered press free to exercise the First Amendment without fear of government intervention.

“We recognize the need to investigate an out-of-control public event where crimes may have been committed, but there are more appropriate tools available to law enforcement than to bully the student newspaper.

“We would like to point out that your own state’s constitution says that ‘The freedoms of speech and of the press are among the great bulwarks of liberty and can never be restrained except by despotic governments.’”

Facing criticism, Garst agreed not to look at the photos until the two sides negotiated. On May 31, Garst and The Breeze, which was represented by the Student Press Law Center, reached a settlement.

The Breeze voluntarily provided 20 photos after prosecutors convinced the paper’s staff and attorney that it legitimately needed them to prosecute crimes. For its part, the commonwealth of Virginia returned the remaining 942 photos and agreed to reimburse The Breeze $10,000 in legal expenses.

Moreover, Garst apologized for causing The Breeze and its staff “fear and concern.”

Thisdell says there is a lesson for journalists in this ordeal.

“Always be prepared,” she said. “You never know what’s going to happen.”

Experts: Use Technology to Open Government