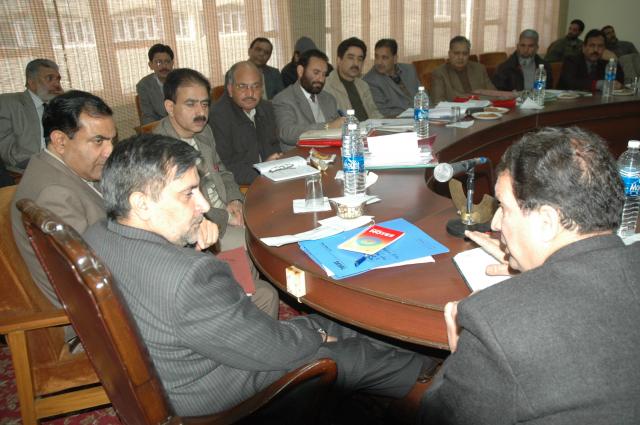 Highlighting the importance of forests in sustaining the economy and maintaining ecology of J&K besides being an attraction for the tourists all over the world, Minister for Forests and Environment Mian Altaf Ahmad has impressed upon the officers to put in dedicated and sincere efforts to protect the green wealth from further degradation and denudation caused by some unscrupulous and knavish elements.

He said the government is contemplating measures to further streamline the timber distribution system to ensure that timber reaches the deserving persons and its smuggling is put to an end.

Addressing a joint meeting of officers of Forest department and State Forest Corporation at today, the minister stressed for further beefing up the Forest Protection Force to act as the most effective instrumental in checking the timber smuggling. He directed the senior functionaries of the department to start marking of decayed trees and start extraction process on war footing.

While reviewing the over all functioning and performance of the Forest department and State Forest Corporation, the meeting was informed that about seven lakh cft timber was provided to the consumers on concessional rates through forest sale depots besides one lakh quintal of firewood to mosques and Imambaras in the Valley during last fiscal. As a part of afforestation, 11 lakh trees were planted on denuded forests and covering an area of 1424 hectares under the programme. During the period, the department earned a revenue of Rs. 12.06 crore from various sources seized 32590 cft illicit timber, 81 vehicles and 564 horses carrying smuggled timber.

The minister directed the officers to ensure transparency and accountability at all levels in timber distribution and tighten noose around the smugglers, which have been responsible for the vandalization of forests.