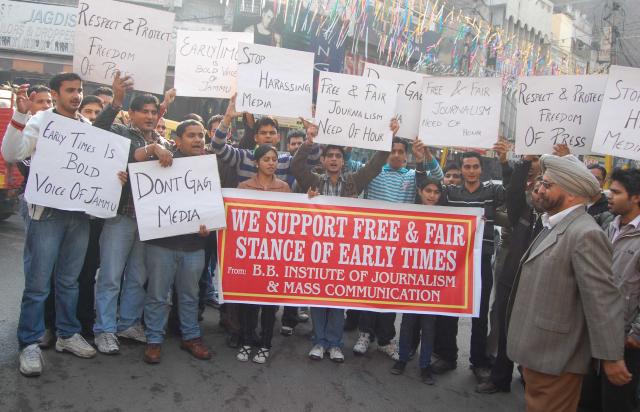 Media gag is not new thing in Jammu and Kashmir. Media and publication houses
used to raise voice against gag in past but seemingly futile as to raise voice
against media gag politicians, students and social workers have taken lead
instead of journalist fraternity. Lack of unity within the fraternity or threat
of torture could be the reason which restricts media persons to register
protests against hurdle creators in their professional duties.

Students of B. B Institute of Journalism and Mass Communication and students
of different educational institutions besides social activists organized a
peaceful rally to register protest against “Freedom of Press” in Jammu today. Rally
started from historical Raghunath temple and culminated at City Chowk.

Talking to media persons social activist, Deep Singh termed protest by
students as good step taken for the freedom of press and it should be
appreciated by all. One of the student said that the authorities are increasing
intolerance toward independent journalism and rising violence against
journalists. He said that to stand in solidarity and work together to restore
public respect for journalists and for an independent media.

Rights of journalists should be strengthen to ensure democratic society,
he said and added that right to operate in a democratic framework with access
to information, protection of sources, freedom to report in professional manner
and practice journalism with responsibility is need of the hour.

It is important to mention that for the last more than a month various
political leaders are expressing serious concern over the curbs on media.
Legislators, corporators and even members from business community are openly
opposing suppression of media.