Protest Against State of Emergency in Pakistan 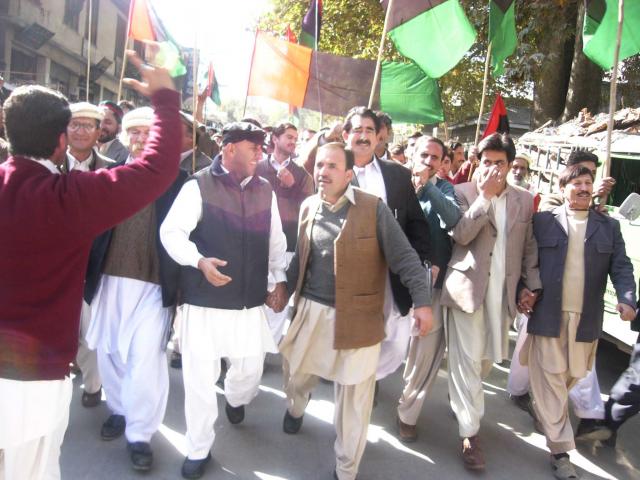 CHITRAL: At a protest rally and public meeting at Chitral, hundreds of Pakistan Peoples Parliamentarian Party  (PPPP) members and party leaders strongly condemned the imposing of a ‘state of emergency’ in Pakistan. Angry workers also arranged a protest rally passing through Shahi Bazar and culminating at the Chitral Press club, where they spoke to a crowded press conference.

Party leaders including Gul Nawaz Khaki, District Naib Nazim Sultan Shah, Subhanud Din, Kashafat younus and Muhammad Hakeem, the Advocate General Secretary PPPP district Chitral, delivered speeches to incensed protesters. They demanded the immediate withdrawal of ‘the state of emergency rule,’ and the restoration of the constitution of Pakistan in its original form.

The leaders alleged that the SRSP was working under the guise of some political leaders, offering projects and funds as political bribes. They warned that if SRSP did not stop this practice, PPPP devotees would seize their funds and stop them by force. They also accused a PML Q leader of giving electricity poles to people using his vote bank. They demanded freedom of media.

Later on, angry protesters rallied, carrying banners and placards with the slogan for withdrawal of emergency from Pakistan. They entered the Chitral Press Club in a rally passing through Shahi Bazar Chitral where they also spoke to a press conference. They said that ‘sovereignty of Pakistan is risky in its present position because no country can run without its constitution.’

They alleged that the present Musharaf government committed price hiking, terrorism, robbery, theft, corruption, and that president Musharaf imposed emergency in the country only to save his seat.

The charges continue that Musharaf: debunked the constitution and deprived the people from their basic rights; discontinued services of those Judges of High Courts and Superior courts who refused to be sworn under Provisional Constitution Order (PCO); and compelled some judges to take oath and swear under PCO forcibly. In light of these circumstances, the Pakistan Peoples Party, a large and significant political party of Pakistan, decided to raise its voice against this ‘illegal step by President.’

The PPPP, through a unanimous resolution, demanded the withdrawal of the state of emergency from Pakistan, the restoration of the constitution and basic human rights, and the reinstatement of Judges who were compulsory retired or terminated due to refusal to be sworn under PCO (including Chief Justice of Pakistan Iftikhar Muhammad Choudhry). They also demanded that governmental control be handed to real and elected representatives through a transparent election.