New Delhi, 13 July 2014: Hundreds of Indian people today held a protest demonstration in front of the Israeli embassy against the most barbaric genocide of this century being carried out by Israel in Gaza strip in which children, women, old and sick people are being killed in large numbers. The protestors submitted a memorandum to the Israeli ambassador in India and demanded to immediately put an end to the attacks. Hundreds of students-youth-intellectuals-artists and ordinary citizens took part in this demonstration and raised their voice against this Zionist-Imperialist attack.
This demonstration was organised on behalf of all the justice-loving citizens of India under the banner of ‘Indian People in Solidarity with Gaza’. 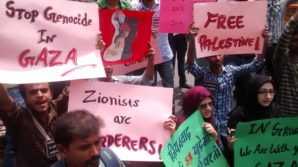 The protestors expressed their anger against this barbaric genocide and showed their solidarity with the Palestinian people. Anti Zionist-imperialist, anti-Israel and pro-Palestinian people slogans were raised in this demonstration. The speakers said that they express their solidarity with the innocent ordinary population of Gaza and demand from Israel to immediately put an end to this genocide. They condemned the silence of the governments all over the world including that of the government of India and said that Indian government must put forward a demand before the Israeli government to immediately put an end to this barbaric genocide.

In case Israel fails to do so, the Indian government must sever its diplomatic relation with Israel.
After the demonstration, memorandum were supposed to be submitted to the Israeli Ambassador in India and to the Indian government, but it could not be submitted as both the concerned offices were closed . But we will submit them tomorrw. In the memorandum to be submitted to the Israeli ambassador, a demand has been made to immediately put an end to bombings and to give recognition to Palestine by stopping its encirclement. 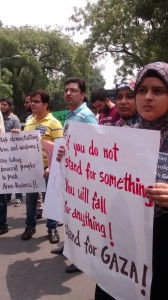 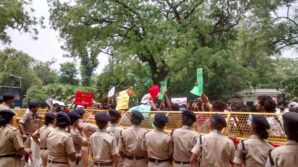 On Behalf of ‘Indian People in Solidarity with Gaza’
Sandeep Samwad