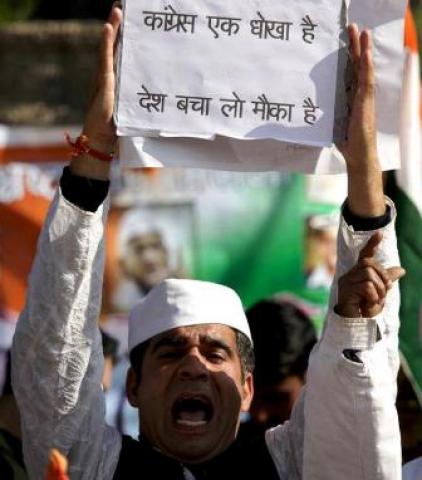 Jammu, 11 (Scoop News) – Jammu & Kashmir unit of India against Corruption strongly  protested in favour of  Janlokpal Bill at Mubarak Mandi to support of Anna Hazare’s  fast protest at Jantar MantarDecember. Hundreds of Volunteers across the state joind the protest raising the Slogans like Rahul Gandhi Hos Mai Aao, Sonia Gandhi Hosh Mai Aao. Protested started at 11am in the morning and concluded at 3pm. Large number of supporters having tricolour in their hands sporadically shouting slogans like Vande Mataram and andBharat Mata ki jai joined the protest.

Addressing the gathering at  Mubarak Mandi State Coordinator of India Against Corruption Ravinder Raina said the Centre government has betrayed the people of by  rejecting the demands of Aana Hazare . He said that it is unfortunate that  standing Committee has rulrd out the Prime Minister ,lower bureaucracy, CBI  and Judiciary  are kept out  from the  ambit of the lokpal besides provisions for Citizen’s Charter and setting up of Lokayuktas under a central law. Raina termed government’s Lokpal as enquiry pal. Veerain Kaul Jammu City Coordinator said it’s a youth revolution and either union government should pass the Janlokpal Bill or  they will be shown the doors .Pritam Sharma Sr. member of IAC  Jammu Kashmir said it is clear from the  Standing Committee draft that the government is cheating the people of India.The committee had not included the lower bureaucracy and the CBI in the Lokpal’s ambit. This is in spite of the fact that the Prime Minister Manmohan Singh gave in writing that three demands would be accepted.

Aana Sharma Working Chairman of Kranti Dal said  our Prime Minister has lowered the guards before Rahul Gandhi and Sonia Gandhi because earlier he assured  Aana ji  that Parliament agreed  with the demands of formulation of a citizens’ charter but know he has term his ears deaf.  Advocate Rajesh Thappa a member of Bar association Jammu said the decision of government to include NGOs and the media in the ambit of the Lokpal reflected the government’s double standards He further saidpresent draft  of lokpal does not have investigative powers. The government has given nothing substantial for lokpal.