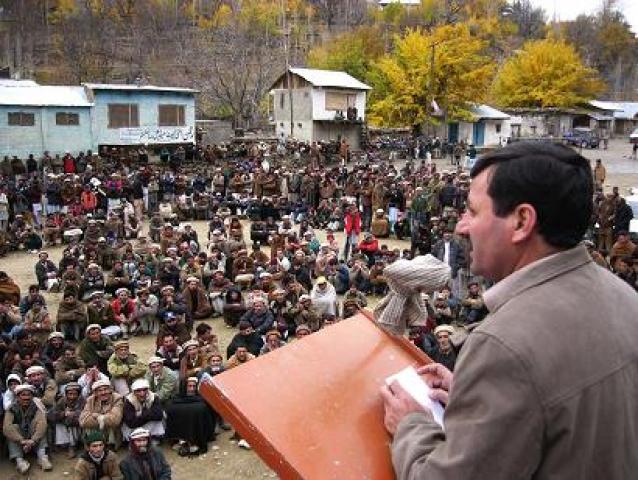 CHITRAL: Provincial Minister for Population welfare Saleem Khan said that the federal government has principally approved construction of road to Tajikistan via Chitral that is the shortest gateway to Central Asian Republics. He was addressing to a public gathering at Garamchishma some 45 KM from here. He said that these republics have no ocean (sea) and now they would be linked with sea for their trade via Pakistan. He thanked president Asif Ali Zardari for approval of Tajikistan road as a 5 km tunnel also included in its designed survey. He said that Prince Karim Aga Khan also struggled for this road and agreed also for funding which will change fate not only of Chitral but also of the country. He said that an other mega project of Lawari tunnel would be completed in PPP regime that was also started by Shaheed Zulfiqar Ali Bhutto and its designed was changed from rail to road tunnel. He also thanked to Premier Yousuf Raza Gilani for allocation of fund for this project despite very financial crises in the country. he also felicitated Chitrali people that the federal government have allowed them to travel inside the tunnel 2 hours daily during winter season when the land route is block due to heavy snowfall.

He also thanked federal government for inclusion of Chitral in Malakand package as due to continue curfew and blocking of road people of Chitral were badly suffered he added. He also announced that federal government also have announced for remission of agricultural loans at Chitral. He criticized some influential persons of Chitral cutting of 1 million feet of forest causing for environmental pollution. He directed heads of all line department to be right their direction and serve the people otherwise they would not be bear more and not be allowed them to serve at Chitral as former DPO Saleem Khan who I posted out within a hour he proclaimed. He also appreciated provincial government for proper negotiation with  federal government and persuaded them for grant of 110 billion rupees as royalty of electricity and thanked to Prime Minister for issuing directive regarding releasing of 10 billion fund immediately. As a result the provincial government would be able to establish more hydro power stations and also to up-grade its existing power houses. He said announced for construction of one hydro power house at Garamchishma as water available plentiful for this purpose. He said that he has demanded for increasing number of police at Chitral and demanded for 1000 more posts for police and 400 posts of border security force (border police). He also announced for up-gradation of girls  high schools to higher secondary one in Chitral district. As well as a cadet college will be established here in near future he added. He also announced up-gradation of girls primary school to middle cadre at this area. He stressed upon the different local committees to monitor ongoing work and fund would be release to contractor when  you assure for work completion.

He directed Chitral police to handle with iron hands who spreading social evils in the district. He assured the nation that implementation of 1975 notification would be raised on the floor of provincial assembly. He said that a proposal of 1 million rupees have been sent to federal government for maintenance of Garamchishma play ground in case of non releasing the fund it will be complete from my discretionary fund.