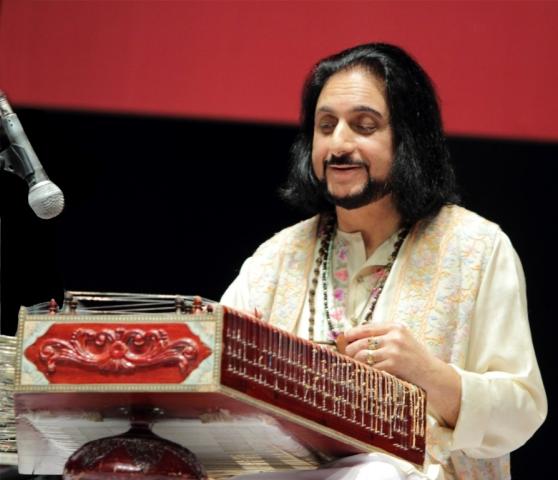 Pandit Sopori represents the 8th generation of music greats of the 300 year old Sopori Parampara and Sufiana Gharana of , the exclusive traditional Santoor family of the country. The Legendary Santoor Maestro and Music Composer has introduced and established the ‘Sopori Baaj’ in the realm of Indian Classical Music for which he is hailed as the “Saint of Santoor” and the “King of Strings”. He has been the pioneer in establishing the Santoor on national and international platforms as a complete solo instrument. The quiet and unassuming maestro has come long way since he created history by being the first person to play the Indian Classical music on the Santoor in concerts way back in the early 1950’s. In his decades of dedicated work he has explored various dimensions of the Santoor, carrying out many path-breaking innovations. He has led the revival of Sufism to spread the message of humanism amongst the masses. Having composed over 5000 songs, he has used his Santoor and his compositions to highlight the concept of oneness and foster unity enshrining the idea of national integration, humanism and peace amongst the common man and the youth in particular. Regarded as the cultural bridge of the State of Jammu & Kashmir and the rest of the country, he has been honoured with various national and international awards and decorations like the prestigious Padma Shri, Sangeet Natak Academy Award, J&K State Award, National Flag Honour of the Arab Republic of Egypt, National Shiromani Award, Delhi Ratan Award, Delhi Telugu Academy Award, Beenkar Samman, Baba Allauddin Khan Award, Sangeet Bhushan Award,Sangeet Vibhuti Award, Raag Sagar and many more including dozens of lifetime achievement awards.