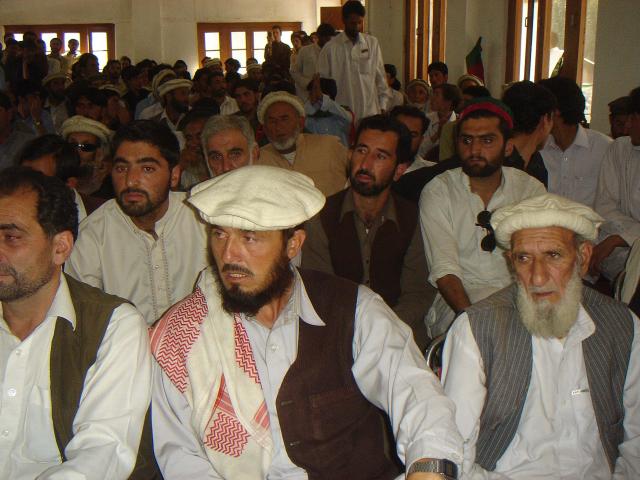 CHITRAL:  Members of Provincial Organizing Committee Pakistan Tahreeki Insaf (PTI) visited Chitral who also delivered speech on the occasion to party workers for organizing and strengthen the party. Members of committee assured Chitral people for rendering them all possible support in a public meeting. The public meeting was started with the recitation from the Holy Quran while a student read Naath Sharif. The speakers determined for implementation of social and economical justice as well as rule of law if they success in next election. They criticized suspension of work on Lawari tunnel which is a matter of life and death for the people of Chitral. They stressed upon the party workers and public to must support Imran Khan chairman of PTI to support his vision for implementing of fully justice in the country in each sector. They hailed services of Imran Khan like construction of hospital and for his vision of equal education system for all. They said that we also respect of Zulfiqar Ali Bhutto as well as Shaheed Benazir Bhutto but now situation of PPP is totally change and there is no offspring or heir of Z.A Bhutto in the party. The speakers stressed on the central cabinet to issue tickets for election only to those candidate who support and recommend by party workers. They strongly lamented dilapidated conditions of roads in Chitral and demanded from the elected representative to must be resign from assemblies. They also criticized 18 hours load shedding by Pesco despite that Chitral having potential of 4500 Megawatt of hydro power generation. They also condemned ANP and MQM drama where a large number of people were killed  in . They announced that they will must release fund for completion of Lawari tunnel if they came in rule. They criticized our rulers who 97 billion Dollars in Swiss bank and facing great financially crises. They stressed upon the people to must help Imran Khan of PTI for implementation of social justice and rule of Law. Those who spoke on the occasion were  Shahzad, Haji Sultan, wing commander retired Fardad Ali Shah, Abul Latif district President of PTI, Muhhamad Ali Jinnah, Naik Muhammad Khan, Shah Farman political Advisor, Shoukat Yousufzai Media Advisor, Rahmat Azam who also joined PTI and left PPP, Asad Qaisar and other. A large number of people attended the public meeting.