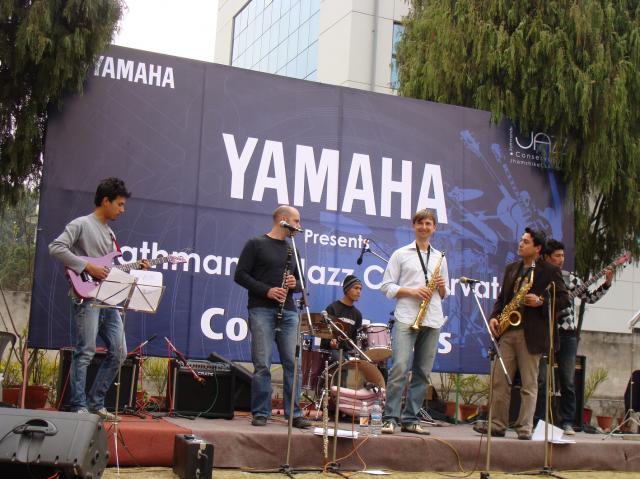 Nepal-based Yamaha dealers and other business companies have on Saturday captured the public road at Durbar Marg in Kathmandu Metropolis.

All vehicles were banned in the pivotal spot of Kathmandu. The road was blocked even for those who wanted to walk through. Big musical concert stages were set as road barriers.

About 500 well-armed security personnel were deployed to protect the organizers of the street festival.

A musical concert tailored to teenage emotions was organized to gather crowds of school-goers on the weekly day-off.

No political parties or any ‘pro-public’ pressure groups have yet objected to this privatization of the public road.

Some police personnel in the street told this reporter that it was not logical to organize such a commercial program by banning people to use the road for their destination. One of them, however, added, “What to do, we have to obey the command from above. Higher authority had to think about the pain caused to public.”

A woman carrying a three-year child on her back said, “I don’t understand if it’s democracy. Who gave them (organizers?) authority to make this road their private property?”

A well-clad businessman, who identified himself as Niresh Man Pradhan, expressed his pleasure at this street festival. While having hamburger with his two children at the festival spot, he said, “It is the life of city. No objection to the street festival.”

However, an angry youth uttered, “It is illegal to capture the road for private and commercial purposes. It means there is no state power at all in Nepal.”

From human rights point of view, no such program can be organized in the middle of the public road even with the permission from the government. It, therefore, is automatically understood that the ‘government’ has allowed the organizers to do so. Besides, the government has also proved its knowledge about the program by deploying 500 security personnel at the spot.