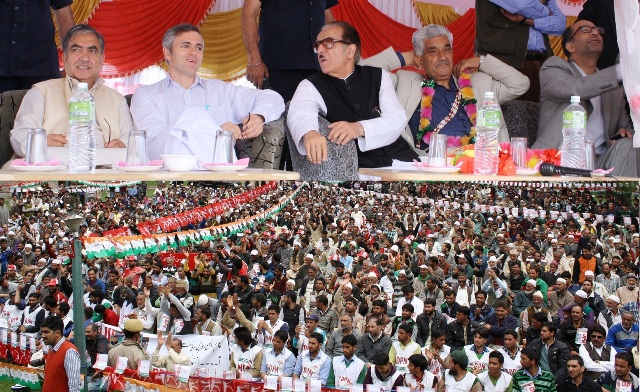 Tangmarg,May 03, (Scoop News)-Cautioning the people against what he termed as an “unholy alliance” of PDP and BJP to divide the voters and wedge apart different sections of the society for power politics, Chief Minister Omar Abdullah who is also Working President of the National Conference Saturday asked the voters of Baramulla-Kupwara Parliamentary Constituency to puncture the balloon of deceptive politics of PDP by extending full support to NC-Congress joint candidate, Sharif-ud-din Shariq.

Addressing an Election rally at Tangmarg today, the Working President of National Conference said that in the current Parliamentary Elections voters have to make an important decision of keeping divisive, communal and deceptive forces away from power by casting their votes with responsibility and insight. And given our history of secular ethos and brotherhood, the people of Jammu and Kashmir have a greater responsibility to defeat communal and polarizing forces by rallying behind the NC-Congress Candidates.

Omar Abdullah asked the people to come out in large numbers on the 7th of May to cast their votes in favour of the NC-Congress Alliance candidate Sharief-ud-Din Shariq and hand a miserable defeat to PDP – a party that hadn’t thought twice before falling into Narendra Modi’s lap for the promise of political patronage. Omar Abdullah said that PDP was acting as the indoctrinated State wing of BJP in J&K and had gone to the extent of fielding candidates tactically in Jammu and Udhampur Seats to divide the anti-Modi vote, thereby helping Modi’s candidates.

Omar Abdullah said that every vote polled in favour of the NC-Congress alliance candidate would be a vote in favour of Rahul Gandhi while all votes cast in favour of the PDP candidate would directly benefit BJP and Narendra Modi. “You have to make an important decision and reject the forces who want to divide you based on their communal venom and world-view”, he said. Omar Abdullah added that the dangerous quid-pro-quo political game played by PDP to help Narendra Modi with the hope that in return he will extend his blessings to the PDP leadership has to be foiled with full force and might. He asked the electorate of Baramulla-Kupwara constituency to contribute collectively and en-masse in defeating the communal, anti-J&K, BJP-PDP nexus by voting for Sharif-ud-din Shariq.

Omar Abdullah said that the Lok Sabha Elections are meant for electing Members of Parliament and consequently the Prime Minister of the Country through the Parliament Members, and it has nothing to do with the election of MLAs in the State or with the re-election of the State’s Chief Minister. “When the occasion of State’s Assembly Elections arises, my government and me will come to you with our performance and report record on peace, reconstruction and development fronts”, he said elaborating that at the time of Assembly Elections full details of each and every work done by the coalition government would be presented to the people. Omar Abdullah said that right now, in these Parliament Elections, voters have to cast their votes to elect the Parliament Members who would voice their concerns in the Parliament and safeguard the interests of the State – traits that National Conference leaders have exhibited time and again in the Indian Parliament.

Omar Abdullah said that the track record of Sharief-ud-Din Shariq and other NC-Congress alliance candidates as Parliament Members has been exemplary and has aided development initiatives of the State government. He said they have highlighted the concerns of the State vociferously in the Parliament in the past and would continue do so in future too.

The Working President, National Conference said Jammu and Kashmir has remained the abode of pluralistic ethos, communal harmony and brotherhood between various sections of the society. He said the benchmark of NC-Congress political agenda has been the slogan of Hindu-Muslim-Sikh Itihaad (Unity between Hindus, Muslims, Sikhs and other faiths and sections) and that both NC and Congress have always worked for strengthening these values in the State. “We have upheld the inter-faith solidarity, equitable development and inclusiveness all along”, he said and added that a conspiracy is being hatched by PDP and BJP to divide the State and its people on the basis of religion, sects and language. “You have to be cautious against this design”, he told the people.

Filed under: News, Politics
Share Tweet Pin G Plus Email
previous article: Only sensible use of vote can change destiny of state: Baig
next article: Patient Care Services Have Paralyzed In All Government Hospitals As Nurses Withdrawn From Their Services