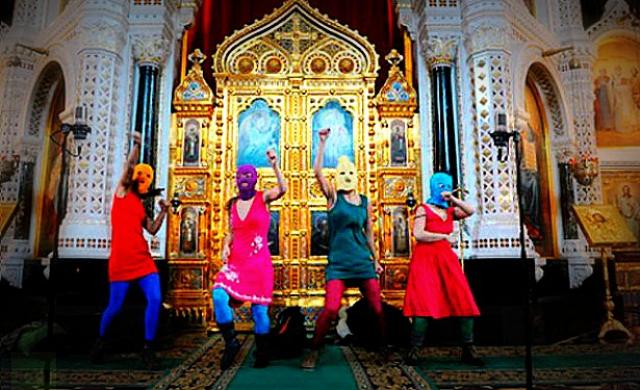 British reporter Phil Black stood outside the courtroom on August 17, 2012 just after the court handed down the Pussy Riot verdict: "A great many people agree that their performance was tasteless… but a large number of people believe that this was a statement of free speech, perhaps even an artistic statement."

All great art strikes us as "tasteless," because it is, before our eyes, revising the dictates of taste. Tchaikovsky, Emily Dickinson, Picasso initially appeared as abrasive as 4 women in bright-colored masks doing high kicks on a church altar and chanting, "Mother Mary, please drive Putin away!"

In the courtroom, the Pussy Riot members smiled with playful exhilaration. They were now international martyr-heroes, and more importantly, had reimagined Punk, pushing beyond the futile gestures of Sid Vicious and Johnny Ramone.* Their performance at Christ the Savior Cathedral revealed a dazzling truth: No religion is safe before a three-note guitar solo! No free market tyrant can sleep soundly in his bed!

*Their greatest achievement, perhaps, was forcing reporters around the world to repeatedly use the phrase "pussy riot."