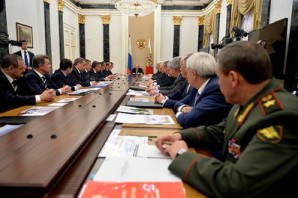 “The issue on our agenda is unquestionably an urgent one. We will talk about countering extremism”, said Putin. Pictured here: Putin addresses security council members, including members of his military and security services.

On November 20, 2014 President Vladimir Putin held an expanded Security Council meeting in the Kremlin to discuss the draft Strategy for Countering Extremism in the Russian Federation through 2025.

In addition, the meeting considered a range of issues pertaining to improving state policy in countering various kinds of extremism.

The issue on our agenda is unquestionably an urgent one. We will talk about countering extremism.

Pursuant to one of my instructions, a corresponding Strategy has been drafted and presented today for your consideration.

I do not believe there is any need to prove how dangerous the very nature of extremism is and how destructive its ideology is – the ideology of intolerance, hatred and animosity. In all its manifestations, extremism is aggressive in nature, seditious and often violent and linked to terrorism.

It infringes on the rights and freedoms of citizens, often even endangering their very lives; it is a threat to national security, capable of cardinally unbalancing the political, economic and social systems. Such types of extremism as nationalism, religious intolerance and political extremism are especially dangerous for society and for the state. Every crime of this type (usually resonant and heinous in itself) can provoke mass violations of public order.

I would like to add that in the modern world extremism is often used as a geopolitical instrument to rearrange spheres of influence. We see the tragic consequences of the wave of so-called ‘colour revolutions’, the turmoil in the countries that have undergone the irresponsible experiments of covert and sometimes blatant interference in their lives. We take this as a lesson and a warning, and we must do everything necessary to ensure this never happens in Russia.

There is no need to speak of the irreversible consequences the spread of extremist ideas may have for our multi-ethnic nation. Therefore we must consistently and persistently work to prevent extremism, to remove even its prerequisites and to reveal in a timely fashion the causes that can provoke ethnic, social or religious conflicts.

This is certainly not a departmental job. We will not be able to achieve results through the efforts of law enforcement agencies alone. This multifaceted complicated activity should involve other concerned ministries, all levels of government, the education system, political parties, civil society institutions, human rights organisations and representatives of the traditional religions in Russia.

This should not be piecemeal involvement, but a unified front, so to speak, which should act to prevent extremism, jointly educate people, including via the Internet, and create conditions for stronger peace and accord in society.

Once we achieve such coordination in every region, in each municipality, then we will have overall results in countering extremism. People would know that on their territory, there are authorities and there is a proactive and concerned society and together they can effectively resist any manifestations of extremism and maintain calm and stability.

In such conditions of trust and support, it is much easier to create an atmosphere of renouncing extremist propaganda. At the same time, the recognition by the citizens of the danger posed by extremism guarantees the efficiency of the measures taken by the authorities.

I would like to single out some priority areas of our work. We should pay special attention to interethnic and inter-religious relations and fully support the culture, traditions and identity of the peoples living in a given area, town or city. This is a very delicate job, but you know what can happen if it is left undone.

The second area is work with the younger generation. It is among them that the leaders of extremist organisations are trying to find followers and conduct their propaganda, primarily using the internet. Extremist ideology is gaining momentum in the virtual world, spilling out into the real one.

The third important area is the improvement of the migration policy. We still have quite a few problems here that have to do with illegal, uncontrolled migration. We know that this breeds crime, interethnic tensions and extremism. We need greater control over compliance with regulations covering migrants’ stay in Russia and we have to take practical measures to promote their social and cultural adaptation and protect their labour and other rights.

All the above issues are inter-related. Therefore, we need to take a complex approach to countering extremism. Moreover, this job requires thorough knowledge of the situation in each specific region and federal district.

We must constantly monitor and analyse relations between various ethnic and social groups. We should undoubtedly involve experts and researchers in this activity. I would like to stress that this is a personal responsibility of regional heads and Presidential Plenipotentiary Envoys. On the federal level the activity will be coordinated by an inter-departmental commission on countering extremism in the Russian Federation.

In conclusion, I would like to say that countering extremism has nothing to do with intolerance towards dissenters. Russia is a free democratic country and its citizens have the right to their opinion, the right to voice it and to be in opposition to the authorities.

Moreover, no national leadership could ever be effective without society playing this role. All people have the right to propose their solutions to pressing issues, they have a right to form parties and public organisations, and take part in elections. It is important that they exercise their rights, express their political preferences, positions and views in a civilised and legal manner.

As we assert our freedom of choice, the right to hold meetings, marches and rallies, we should not forget that we are responsible for our words and deeds. We must know and bear in mind that breeding conflict between people of different ethnicity and religion, propaganda of nationalist ideology, mass violations of public order on these grounds and particularly calls for a violent overthrow of the existing regime are direct manifestations of anti-national thinking and extremism.

All of us must bear in mind the destructive consequences of such actions. Leaders of public movements should remember this; they should know that such actions are punishable by law. I would like to stress that punishment for spreading extremist ideas and for extremist actions must be unavoidable.

Colleagues, your draft Strategy is based on the challenges facing Russia. This document is designed for the long term and should become a guideline for all branches and levels of authority in their actions.

I would like to reiterate that one of our key priorities is to breed public rejection of and civic immunity to the dissemination of extremist and radical ideas. For this purpose, we must unite the efforts of the authorities, society and all state and social agencies.

I suggest that we discuss the draft Strategy today and make any amendments or additions, if necessary. This should be a balanced, well-prepared document that we could truly use in practice.

Unfortunately, we still have quite a few unresolved issues here, and we are aware of it. I have mentioned developments in the world. Life keeps teaching us new lessons. Sometimes this happens far from our borders; however, we should still be aware of them.

The latest atrocity in Jerusalem, where praying people were attacked with an axe – this is beyond comprehension. Knowing this, realising the danger of such manifestations and having analysed their causes, we must make timely decisions that would save our country from such things.

Let us discuss this in detail.’