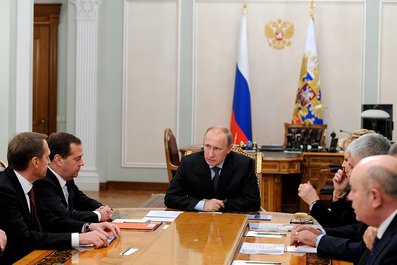 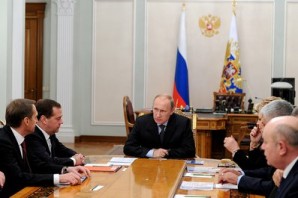 President Vladimir Putin held a briefing session with permanent members of the Security Council on November 6, 2014.

The meeting addressed issues on the socioeconomic agenda and international affairs, including the situation in Donbass with regard to multiple violations of the ceasefire by the Ukrainian armed forces.

A detailed exchange of views was held on a wide range of international topics within the context of preparing for the President’s international trip to China and Australia next week to participate in the APECAsia-Pacific Economic Cooperation (APEC) was established in 1989. Russia joined APEC in 1998.

Prime Minister of the Russian Federation

“>, Minister of the Interior Vladimir Kolokoltsev

Director of the Foreign Intelligence Service

Deputy Secretary of the Security Council

permanent member of the Security Council