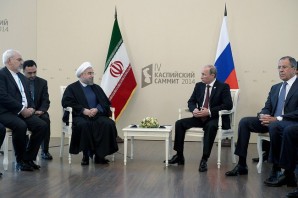 President of Iran Rouhani and Vladimir Putin meet together to discuss international issues of major importance to both nations and the world, including the fight against international state sponsored terrorism.  Gentleman seated to the left of Putin is Russian Foreign Minister Lavrov.

President Vladimir Putin of Russia held an open  meeting with President of the Islamic Republic of Iran Hassan Rouhani .

The two leaders discussed prospects for developing Russian-Iranian relations and the results of the Fourth Caspian Summit, as well touched on the subject of fighting terrorism globally.


In his initial press conference one day after election day, Rouhani reiterated his promise to recalibrate Iran’s relations with the world and the United States in particular. A task which proved extremely difficult  because of the US stance of vilifying Iran and its people as a rogue nation and state sponsor of terrorism.

His efforts have achieved remarkable results and help avoid a military confrontation with the United States which was threatening to bomb Iran and embroil both nations in a war that could cost the lives of  millions of people if Iran didn’t “discontinue its efforts to build a nuclear weapons.”

Mind you there is absolutely no evidence that Iran is building a nuclear weapon in the first place – NONE! But that didn’t stop the US from threatening world war, or surrounding Iran with military bases and stationing warships carrying nuclear missiles that could destroy Iran within less than  20 minutes after a go ahead call from the President of the United States.

Please allow me to once again welcome you to Astrakhan, Russia. We worked very productively within the framework of the Caspian Summit, achieving good results, thanks in part to your delegation’s position and your personal stand.

I am very glad that we have the opportunity to hold a bilateral meeting; we met fairly recently, but the volume of our business ties ensures that each of our meetings is quite substantive.

PRESIDENT OF IRAN HASSAN ROUHANI(retranslated): Thank you very much, Mr President, for your warm welcome, as well as the effort that has gone into successfully holding the Fourth Caspian Summit.

In essence, the agreement reached today is the result of intensive efforts from your side and your colleagues. The atmosphere we had at the summit was very positive. It demonstrated that all the nations strive to develop cooperation.

I am very pleased that during the past year, I had the opportunity to meet with you four times and discuss issues of interest to our nations. However, what’s important is not the number of meetings but the progress we have achieved in our relations.

For us, our relations with our important neighbor had special significance, and this significance is increasing today. This is due to bilateral developments, as well as the sensitive situation in the region.

For us, it is a point of pride that we were pioneers, so to speak, among other nations that recognized the threat of international terrorism and began to fight it. Those who are currently attempting to raise the battle flag against terrorism are very late and quite far behind the pioneers in this effort.

I am very happy that our nations have similar or identical positions on many regional issues, as well as on matters on the bilateral agenda. I am also very pleased to have the opportunity today to continue our discussion.