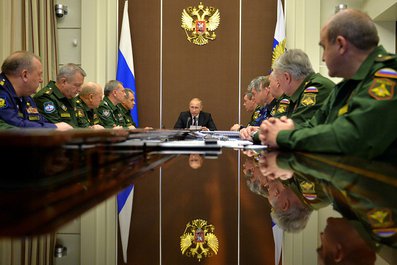 “Developing specific branches of the armed forces is still one of our big military development priorities. I ask the commanders in chief and commanders present to give a brief report on their forces’ training results and the main tasks before them and also to inform us about any problems they face”, said Putin.

On November 24, 2014 President Vladimir Putin held a meeting on developing the Armed Forces.  Defense Minister Sergei Shoigu, Chief of General Staff Valery Gerasimov, and the commanders of the different branches of the armed forces took part in the meeting.

Today, we are continuing our series of meetings on developing the Armed Forces.

We will discuss from every angle all the various aspects, from strategic planning to the current situation with troops’ combat readiness. We will take a separate look too at the results obtained so far from implementing the State Arms Programme.

You remember that ensuring unconditional implementation of the State Arms Programme was at the origin of these regular meetings that we hold twice a year, in spring and autumn. We hold these meetings together with the colleagues here today, that is to say, the heads of General Staff and the Defence Ministry in general, the commanders of the different branches of the armed forces, and as need be with chief designers from the main defence industry companies.

Following our previous meetings, including the meeting here in Sochi in spring, a number of conceptual documents were drafted in the defence sector, setting out the goals, priorities and future shape of the armed forces over the coming 10-15 years. We have made the necessary adjustments to our military development plans as changing circumstances demand.

We have taken decisions on improving the armed forces’ composition and structure. For example, starting from December 1, the new united strategic command in the Arctic region will start operation, based around the Northern Fleet. Work is also in steady progress to establish a group of forces in Crimea.

We paid particular attention this year to inspecting the armed forces’ combat capabilities. We continued the practice of snap inspections and held several thousand exercises and training manoeuvres, including the big strategic command headquarters exercise, Vostok 2014, which involved 155,000 service personnel, 8,000 pieces of military hardware, and as many as 85 ships and 650 aircraft.

Most of you here today were in some way or another involved in that big exercise. I ask Defence Minister Sergei Shoigu to give a brief summary of the main results of Vostok 2014, based on the analysis that was made. Above all, of course, we need to assess this new method of organising military exercises and the results of inter-agency cooperation.

Developing specific branches of the armed forces is still one of our big military development priorities. I ask the commanders in chief and commanders present to give a brief report on their forces’ training results and the main tasks before them and also to inform us about any problems they face.

Now, I propose we move on to discussing specifics.  Let’s begin with the Defence Minister, concerning the Vostok 2014 exercises.

Without knowing that you would give orders to hold a snap inspection in the Eastern Military District, we prepared to hold the scheduled Vostok 2014 command and staff exercises.

And it so happened that in the first phase, when preparing these exercises, we carried out a great deal of work to hold special exercises in all areas of combat support. We held exercises on intelligence, electronic combat, communications, logistics and information security.

During this time, we received the command to hold snap inspections, which also involved the Western and Central Military District troops. In total, as you already noted, this involved 155,000 service members, 8,000 units of equipment, 85 ships and 650 aircraft. Overall, this later transitioned into the planned Vostok 2014 exercises.

The exercises were held simultaneously in 13 Russian federal constituent entities. We planned to hold all the exercises over the course of eight days. As a result of all the events and given the snap inspection, our troops were engaged in exercises for 23 days.

During this time, bridges were built over major rivers, including railroad and road bridges, such as a major bridge over the Bureya River. Major air routes were crossed at a distance of 12,000 kilometres. Landing troops disembarked on difficult-to-reach islands, including the New Siberian Islands, Wrangel Island and Cape Schmidt, as well as Chukotka and Kamchatka, Sakhalin and the Kuril Islands.

On the whole, all the troops performed at a level that was – I wouldn’t say “excellent,” but “good.”

Following your instructions, all comments and problems were compiled for you in a report by the Presidential Control Directorate.

I will focus on the suggestions. Our main suggestion, in addition to additional weapons provisions in the East, concerns some changes to the State Defence Order. It mainly pertains to missiles and artillery ammunition.

As far as mobilisation is concerned, we wanted to suggest that elected governors, mayors and officials reappointed to govern Russian federal constituent entities pass a required two-week training at the General Staff Academy for mobilisation preparedness and governing regions during period of mobilisation (this could be done more quickly with an Executive Order from you). This also pertains to federal executive agencies.

In addition, we feel it is essential to make amendments to rules on building and renovating existing roads to create corresponding platforms for use during special periods as military airfields. Unfortunately, during a certain period, this requirement was eliminated from the rules for building roads; but now, there is a need to include it.

We also conducted activities on 14 firing ranges.  The air force troops conducted effective missile launches; nearly all the launches were successful. And with regard to this, we had a few suggestions. I will report these suggestions to you separately; they concern the military industrial complex.

On the whole, all of the comments were taken into account, and naturally, we will examine them as we carry out the Armed Forces combat training plan for 2015. My report is complete.

VLADIMIR PUTIN: I would like to thank all the participants. We will need to take into account everything you just spoke about, or in any case, part of it, during our meetings over the course of this week.”