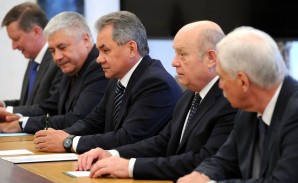 At a briefing session with permanent members of the Security Council is Mickhail Fradkov, (2nd man on the right ) the Director of the Russian Foreign Intelligence Agency (SVR). The SVR is responsible for intelligence and espionage activities outside the Russian Federation…Seated next to him is the Defense Minister of Russia Sergei Shoigu.
,

On June 25, 2015 President Vladimir Putin held a briefing session with members of the Russian Permanent Security Council in Moscow.

The Security Council of the Russian Federation (SCRF) (Russian: Совет Безопасности Российской Федерации) is a consultative body of the Russian President that works out the President’s decisions on national security affairs. Composed of key ministers and agency heads and chaired by the President of Russia, the SCRF was established to be a forum for coordinating and integrating national security policy.

The Security Council examines critical issues that affect the national security of the Russian Federation and prepares “presidential decisions” on the “organization of defense, military organizational development, defense production, and military and military-technical cooperation of Russia with foreign states”, as well as the formulation and implementation of foreign policy, and the monitoring of public expenditure on defense, national security and law enforcement.

What follows is the publically released portion of the meeting minutes, including fascinating insight into the opinions expressed by Russian Foreign Minister Lavrov  on the evolving scandal of US illegal spying activities in Europe.

Mr Lavrov will tell us about the consultations in Paris. Let’s start with this. Please, Mr Lavrov.

Foreign Minister Sergei Lavrov: On the whole, it was not useless because even despite certain wrangling during the discussion, the main outcome was the acknowledgement of the fact that there is no alternative to complete fulfilment of the Minsk Agreements. First and foremost, the acknowledgement by our German and our French partners of the fact that the overwhelming part of the Minsk provisions should be implemented through direct dialogue between authorities in Kiev and Donetsk and Lugansk.

I can’t say that we have resolved all the problems because this should be done directly by the Contact group and the working subgroups created. I will report on that in more detail later, but on the day of our meeting, a report on the taps [by the United States of the French leadership] was published, and this gave rise to unrest in France so this was another thing that distracted our attention.

Vladimir Putin: How will this scandal end?

Sergei Lavrov: Frankly speaking, I think that Germany’s example [the US special services wiretapping the German leadership] gives the answer: I think that both sides will try to blanket the scandal and forget about it.

Vladimir Putin: That is what would happen.

Note: We asked the Central Intelligence Agency for comment in this situation and they ignored our request.

See video: Will France React To US Spy Claims Like Germany Reacted? https://www.youtube.com/watch?v=cZTG-q8FHsQ