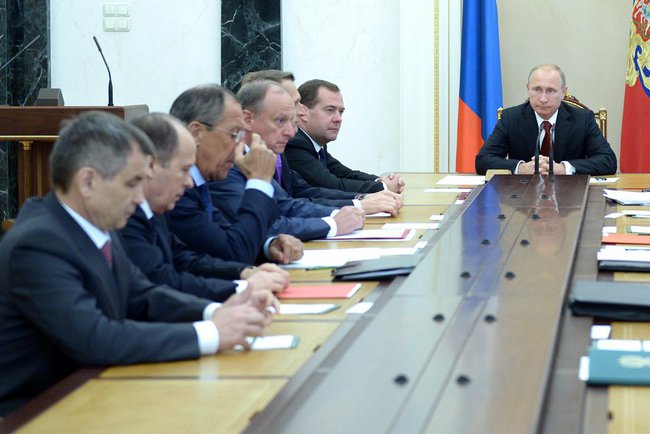 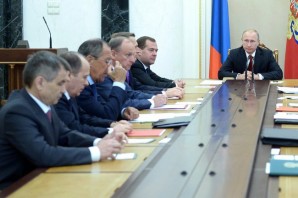 Putin meets with members of the Security Council at the Kremlin. On the right you will notice the binder second from the bottom though to belong to Mikhail Fradkov head of Russia’s Foreign Intelligence Agency (SVR) who was conveniently “cropped out” of the official picture released by the Kremlin. What secrets this particular binder could reveal about US support of ISIS terrorists in Syria – we can only imagine.

Note: The SVR does not maintain a relationship of friendship, trust and cooperation with the United States’ Central Intelligence Agency (CIA) because of that organization’s covert involvement in supporting terrorism abroad (by order of President Obama) most notably in Syria with the funding and support of rebel groups, including ISIS [previously called the Islamic State of Iraq and the Levant, ISIL].*

The information provide about the meeting by Kremlin sources was as follows:

“The meeting discussed implementation of the peace plan to resolve the situation in southeast Ukraine, including carrying out the points set out in Putin’s Plan.

* Note: The US helped train and fund ISIS.

See related video: Busted: US trained ISIS in secret base in Jordan http://www.youtube.com/watch?v=qu0YtkHRBWg