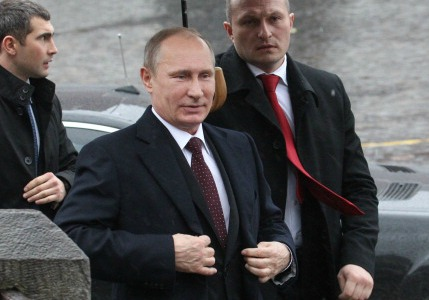 Putin arrives at the Kremlin amid heavy security to meet members of the Russian Security Council. Among those in attendance at the February 27th meeting were Russia’s top spy master  Mikhail Fradkov, Director of the SVR – there to present the latest intelligence information on the situation in Ukraine.

On February 27th 2015 President Vladimir Putin held a briefing session with permanent members of the Russian Security Council. Among those in attendance were the Director of the Russian Foreign Intelligence Service (SVR) Mikhail Fradkov (see profile below).

Unlike the Russian Federal Security Service (FSB), the SVR is responsible for intelligence and espionage activities outside the Russian Federation. It works in cooperation with the Russian Glavnoye Razvedyvatel’noye Upravleniye (GRU, Main Intelligence Directorate), which reportedly deployed six times as many spies in foreign countries as the SVR in 1997.

The SVR is also authorized to negotiate anti-terrorist cooperation and intelligence-sharing arrangements with foreign intelligence agencies, and provides analysis and dissemination of intelligence directly to the Russian president…

The meeting participants discussed in detail the situation with respect to the implementation of the Minsk agreements regarding the withdrawal by parties to the conflict of heavy arms from the demarcation lines.

A number of current socioeconomic issues were also discussed.

Outside of the meeting’s agenda, the President informed the Security Council members of a decision to cut the salaries of Presidential Executive Office staff by 10 percent.

Taking part in the meeting were Prime Minister Dmitry Medvedev

Prime Minister of the Russian Federation

“>, Chief of Staff of the Presidential Executive Office Sergei Ivanov

Chief of Staff of the Presidential Executive Office

Director of the Federal Security Service

Deputy Secretary of the Security Council

Director of the Foreign Intelligence Service

“>, and permanent member of the Security Council Boris Gryzlov

permanent member of the Security Council

With drawl of forces and heavy weapons