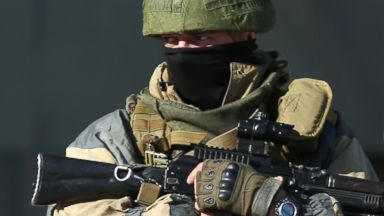 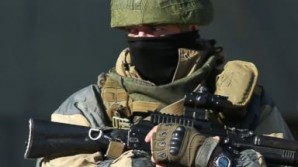 Divided loyalties: A former member of the Ukrainian Army in Crimea joined Pro Russian separatists in the fight against the take over of his country by ultra nationalists in Kiev.

On January 3, 2014 President Vladimir Putin has signed Executive Order On Recognizing as Valid the Military Ranks and Education Documents of Russian Citizens Registered for Draft or as Reserve Servicemen in the Republic of Crimea and the City of Sevastopol, as well as their Military Service Certificates.

The executive order stipulates that when Russian citizens register with military authorities in the Republic of Crimea and Federal City of Sevastopol, their military ranks, and certificates of education and service in the armed forces, military units and law-enforcement agencies of Ukraine shall be recognized as valid.

See video: Refusing to Kill Their Own! Over 40 Ukraine Soldiers Flee Into Russia! https://www.youtube.com/watch?v=gzMtWee8ddU

See related article: Most of the Ukrainian Military in Crimea Expected to Join Russia Military http://www.nationalreview.com/feed/374249/most-ukrainian-military-crimea-expected-join-russia-military-greg-pollowitz