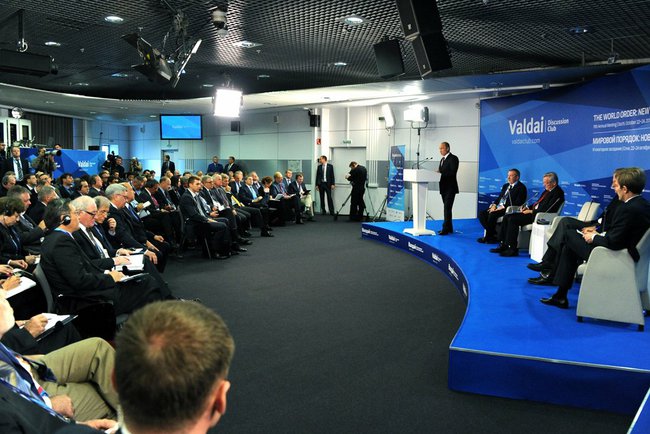 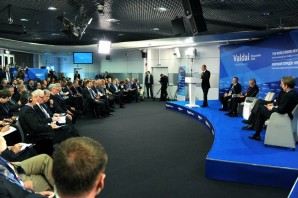 On October 24, 2014 President Vladmir Putin commented on the events in Syria and the fight against terrorism as part in the final plenary meeting of the Valdai International Discussion Club’s XI session.The meeting’s theme is The World Order: New Rules or a Game without Rules.

Here is some of what Putin had to say:

“In Syria, as in the past, the United States and its allies started directly financing and arming rebels and allowing them to fill their ranks with mercenaries from various countries. Let me ask where do these rebels get their money, arms and military specialists? Where does all this come from? How did the notorious ISIL manage to become such a powerful group, essentially a real armed force?

As for financing sources, today, the money is coming not just from drugs, production of which has increased not just by a few percentage points but many-fold, since the international coalition forces have been present in Afghanistan. You are aware of this. The terrorists are getting money from selling oil too. Oil is produced in territory controlled by the terrorists, who sell it at dumping prices, produce it and transport it. But someone buys this oil, resells it, and makes a profit from it, not thinking about the fact that they are thus financing terrorists who could come sooner or later to their own soil and sow destruction in their own countries.

Where do they get new recruits? In Iraq, after Saddam Hussein was toppled, the state’s institutions, including the army, were left in ruins. We said back then, be very, very careful. You are driving people out into the street, and what will they do there? Don’t forget (rightfully or not) that they were in the leadership of a large regional power, and what are you now turning them into?

What was the result? Tens of thousands of soldiers, officers and former Baath Party activists were turned out into the streets and today have joined the rebels’ ranks. Perhaps this is what explains why the Islamic State group has turned out so effective? In military terms, it is acting very effectively and has some very professional people.

Russia warned repeatedly about the dangers of unilateral military actions, intervening in sovereign states’ affairs, and flirting with extremists and radicals. We insisted on having the groups fighting the central Syrian government, above all the Islamic State, included on the lists of terrorist organisations. But did we see any results? We appealed in vain.

We sometimes get the impression that our colleagues and friends are constantly fighting the consequences of their own policies, throw all their effort into addressing the risks they themselves have created, and pay an ever-greater price.”

Filed under: News, Terrorism
Share Tweet Pin G Plus Email
previous article: Putin offers insights on the Islamic State group and how to really destroy them
next article: Putin talks about ISIL and explains how the terrorists are getting money from selling oil