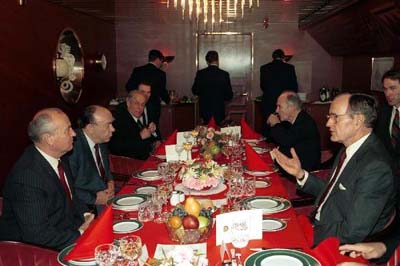 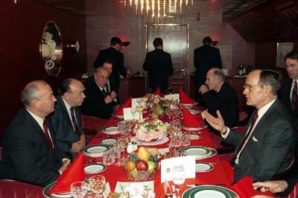 President George H.W. Bush approached the Malta summit with Soviet leader Mikhail Gorbachev 20 years ago – a meeting that many credit with ending the Cold War.

Vladimir Putin had a telephone conversation with George Herbert Walker Bush, the 41st President of the United States of America, on the initiative of the Russian side:

“President Putin warmly congratulated George Bush on his 90th birthday and wished him health and prosperity, noting his personal contribution to the development of the Russian-American relations”

George Herbert Walker Bush (born June 12, 1924) is an American politician who served as the 41st President of the United States (1989–1993). A Republican, he had previously served as the 43rd Vice President of the United States (1981–1989), a congressman, an ambassador, and Director of Central Intelligence. He is the oldest living former President and Vice President. He is also the last living former President who is a veteran of World War II.

In 1989, just after the fall of the Berlin Wall, Bush met with Soviet General Secretary Mikhail Gorbachev in a conference on the Mediterranean island of Malta.

Though no agreements were signed, the meeting was viewed largely as being an important one; when asked about nuclear war, Gorbachev responded, “I assured the President of the United States that the Soviet Union would never start a hot war against the United States of America. And we would like our relations to develop in such a way that they would open greater possibilities for cooperation…. This is just the beginning. We are just at the very beginning of our road, long road to a long-lasting, peaceful period.”

Source: The Malta Summit; Transcript of the Bush-Gorbachev News Conference in Malta http://www.nytimes.com/1989/12/04/world/the-malta-summit-transcript-of-the-bush-gorbachev-news-conference-in-malta.html

Filed under: News, World
Share Tweet Pin G Plus Email
previous article: ISIS terrorists based in Syria and Iraq are a bunch of “hoodlums” says Senator Graham
next article: Buddagaya Temple Converted To A Colorful Lantern