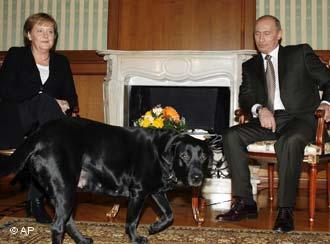 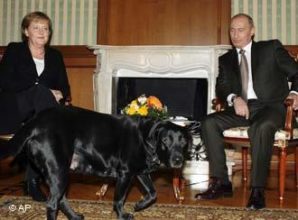 Everyone knows that German chancellor is afraid of dogs. Her staff always warns everybody in advance against any dogs wherever she walks during her visits. Now doubts, President Putin- former FSS officer is well aware of that. One day in January of 2007, Mr. Putin invited her to his summer residence on the Black Sea. As Russian President and German chancellorwere holding the photo session for Medias, Putin’s dog – a big Labrador“Conny” entered into the room where they were.Mrs. Merkel’s face fell and she hardly pulled her together. – Does the dog scare you, – asked Mr. Putin maliciously, who had already presented her with toy dog with a leash.
May be since then Mrs. Merkel is very careful with opinion and desires of Mr. Putin, especially in terms of former soviet republics in the Eastern Europe. The results were observed soon enough. The position of Germany, hesitation, or better say acting with watching the reaction of Russia, all of that was distractive for regional security. In particular, the rejection of Mrs. Merkel to provide Georgia and Ukraine with NATO Membership Action Plan in Bucharest in April of 2008 led to the war between Russia and Georgia in August. As a result of this war, Georgia lost 20 percent of its territory. Nowadays, the long-term hesitation and reluctance of Germany to provide Ukraine with European perspective resulted into annexation of Crimea by Russia, which ignored exhortations and sanctions, imposed for the first time by USA and EU few days ago. And it is likely that Russia in not going to stop. Even in the light of thesetheatrical sanctions of the West against Russia, Mrs. Merkel stated that expelling Russia from G8 is untimely, stressing on necessity of “sanctions combined with dialogue”. And all that happens, even though Putin’s intention to invade the whole of Ukraine together with Transnistria is getting more evident.
Mrs. Merkel, Labrador “Conny” is the friendly, reliable and cheerful dog. Don’t be afraid of it. But there is serious trouble with its master especially in terms of mental health. If Labrador “Conny” acted like Mr. Putin in respect of international community, he would be in a focus of relevant veterinary service a long time ago. Mrs. Merkel, it’s not too late to strengthen a cage and even cure disease with intensive care. But you should act decidedly and without delay using strong medicine and confining patient.
Filed under: News, Politics
Share Tweet Pin G Plus Email
previous article: Two day Urdu Conference opens in Jammu
next article: SAIL commissions sinter unit at Bhilai Plant