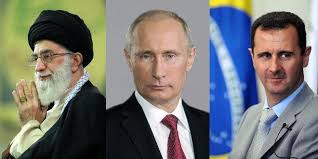 Vladimir Putin is winning admirers in the West (and East) because he tells it as he sees it and dares to say out loud what others think. The American foreign policy establishment, on the other hand, is perceived as disingenuous because its leaders string together homilies hamstrung by ideology and political correctness.

Russia has overseas military bases in only one country, outside the borders of the previous Soviet Union, Syria – a naval base in Tartus and an air base in Latakia (ancient Ugarit). The United States has hundreds; some sources count as many as 800 overseas military installations. In the Middle East, the United States has military bases or installations in all the countries surrounding Syria and Lebanon – Turkey, Iraq, Jordan and Israel. The Syria Civil War, on some level, is an indirect attempt by the West to eject Russia from the Mediterranean Sea. From this perspective, it is surprising that Russia waited so long to intervene and a disappointment that the West didn’t act more decisively and get the job done. Now it appears to be too late. The Russians have re-established a serious presence in the Eastern Mediterranean.

In the Middle East, the United States is trying to be friends with all religio-ethnic groups – Sunni, Shiite, Jew, Christian, Druze, Kurd. Putin and the Russian elite, on the other hand, have decided to side with one group, the Shiites. This strategic clarity makes the Russian strategy look more powerful and coherent. Putin’s allies are the Syrian Alawites behind the Syrian Baath Party led by Bashar al-Assad, Hezbollah a Shi’a political party and militia that dominates Southern Lebanon, and Shiite Iran. The West, on the other hand, has traditionally supported Sunni monarchs and increasingly since the Iran Revolution, Sunni dictators, insurgents and even jihadist, if they were attacking Communists or Iranians.

The real problem for the West started with the invasion of Iraq. George W. Bush and Dick Cheney were too stupid to think a few steps ahead and realize that being the warden of a Shiite democracy won’t work. The Iraq War put the ‘free world’ at odds with Sunnis in Northern Iraq and implicitly the rest of the Arab World. George W and Dick Cheney should have read Roman History to get a sense of the quagmire that is Iraq. Some historians claim that the failed invasion of Iraq by the Emperor Julian to ‘regime change’ an Iranian monarch lead to the downfall of the Empire about 90 years later.

Now the United States is engaged in a weak coalition of the ‘unwilling’, while Putin has an alliance of the ‘desperate but determined’ –‘unwilling’ because the West’s alliance with the Sunnis is fractured along ethnic lines. The Turkish Sunnis don’t trust Kurdish Sunnis who don’t trust the Arab Sunnis who don’t trust the Palestinian Sunnis, read Hamas. In addition, for the Sunni world, a defeat of Sunni ISIL to a apostate Shiite alliance of Alawites (read the descendants of Canaanite Ugarit and worshipers of Baal), Hezbollahians (more Canaanite descendants of the worshipers of Baal), Iranians (Indo-European descendents of the worshipers of Ahura Mazda) and the Southern Iraqi descendants of pageant Ur, Uruk, Akkad and Sumer. would be an unmitigated disaster. Somehow the Sunni alliance needs to defeat ISIL without causing a Shiite, Russian victory.

Following the adage that the best organized always win, Putin is in a much better position than Obama and the West to win this conflict. To win this war, the West must figure out how to invade Northern Iraq with a Sunni Arab army and then establish a separate polity. The Saudis, Kuwaitis and perhaps Jordanians would make sense for this mission, but they probably don’t have the political will or military organization to grab the brass ring.

Putin does have to worry about the 11 million Russian Muslims – most of whom are Sunnis, though none of them are Arabs. If the Sunni alliance were to energize the Russian Muslims to rebel, as they did in Afghanistan with the help of Charlie Wilson, Putin could have another insurgency on his hands.

For now, however, Putin is winning. Russia has re-established its presence in the Eastern Mediterranean and formed a focused and determined alliance with the Shiites of the Middle East.