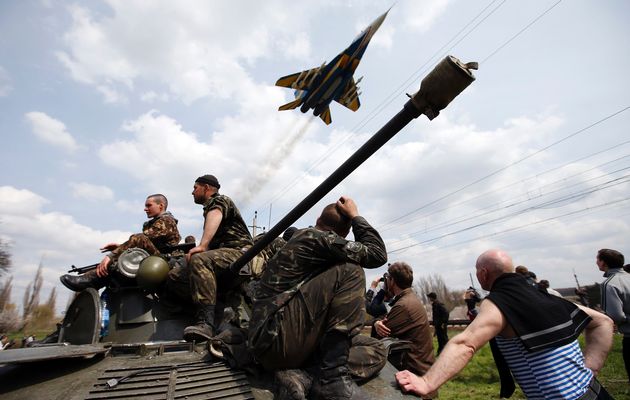 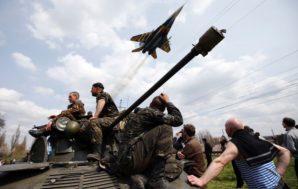 Ukrainian tanks backed up by combat jet aircraft surround a village in eastern Ukraine, suspected of wanting to join the Russian Federation – filled with terrified civilians, including women and children of mostly ethic Russian/Ukrainian background…Note the surface to air missiles under the belly of the Sokhoi combat aircraft.

On September 3, 2014 during a press conference about Mongolia trade agreements a reporter interrupted Vladimir Putin to ask a question about the military situation in Ukraine.

How Putin answered that question was both concise and thorough. Putin also took that opportunity to lay out the case of a peace plan, which the western media completely ignored.

“QUESTION: Mr President, you spoke with Mr Poroshenko today. The Ukrainian authorities initially announced that you had agreed on a complete ceasefire, but then explanations came that what is under discussion are concrete steps for settling the situation, which is understandable, given that Russia is not a party to this conflict. If there was discussion of concrete steps, what are they, and what will happen next?

VLADIMIR PUTIN: Yes, I did speak with President Poroshenko this morning, and it seemed to me at any rate that our views on how to settle the conflict are very close, as the diplomats say.

On the way here from Blagoveshchensk to Ulan Bator, I jotted down a few thoughts that could constitute an action plan of sorts. True, I have only these notes that I jotted down, but I can read them to you if you want.

In order to stop the bloodshed and stabilize the situation in southeast Ukraine, I believe that the parties to the conflict should immediately agree on and coordinate the following steps:

Second, withdraw Ukrainian armed forces units to a distance that would make it impossible to fire on populated areas using artillery and all types of multiple launch rocket systems.

Fourth, exclude all use of military aircraft against civilians and populated areas in the conflict zone.

Fifth, organize the exchange of individuals detained by force on an ‘all for all’ basis without any preconditions.

Sixth, open humanitarian corridors for refugees and for delivering humanitarian cargoes to towns and populated areas in Donbass – Donetsk and Lugansk Regions.

Seventh, make it possible for repair brigades to come to damaged settlements in the Donbass region in order to repair and rebuild social facilities and life-supporting infrastructure and help the region to prepare for the winter.

I think that the Kiev authorities and the representatives of southeast Ukraine could come to basic agreements and cement them at the contact group’s planned meeting on September 5.

I want to note that this statement and all I just said follow on from the telephone conversation with President Poroshenko that you asked about. I hope very much that Ukraine’s government will support the emerging progress in bilateral relations and make use of the positive opportunity the contact group’s work provides to bring about final and comprehensive settlement to the situation in southeast Ukraine, in full and unconditional respect for the lawful rights of those who live there of course.

That is all I have to say. I have nothing to add. Thank you.”