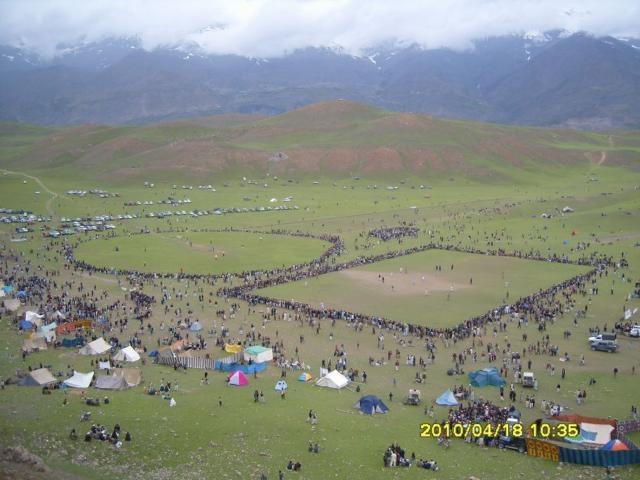 Jashan-e-Qaqlasht, the calendar spring festival of the people of northern Chitral was concluded yesterday after continuing from April 15 to 18. The festival has a history of about two thousand years, but was abandoned after Chitral’s status as a separate princedom came to an end in 1969, to be revived in 2003 through the intervention of a range of civil society organizations including Chitral Association for Mountain Area Tourism (CAMAT). The festival consisted of sporting events and cultural music i.e. folksongs, folkdances, music of reed instrument and that of pure Chitrali sitar.

The objective of the festival was to protect the indigenous Kho culture and to highlight and market it as tourism product so that maximum national and international tourists would be attracted to the region that could help reduce poverty by providing tourism-related job opportunities to the locals apart from promoting cross-cultural understanding and harmony.

To begin with, the inauguration ceremony on April 15 was performed by Sikander-ul-Mulk, who is Chairman of CAMAT as well as Jashan-e-Qaqalsht Committee, and Rehmatullah Wazir, DCO Chitral, who opened the polo match in the afternoon. Talking to the gathering, he reaffirmed the commitment and support of district administration in organizing Jashan-e-Qaqlasht on regular basis in future.

This year Jashan-e-Qaqlasht was effectively advertised in major national newspapers and generously sponsored by Sarhad Tourism Corporation (STC), which went a long way in attracting visitors and organizing the event in a befitting manner for which the people of northern Chitral and organizers of the festival thanked STC through repeated announcements and banners. It would be pertinent to mention that CAMAT facilitated Jashan-e-Qaqlasht Committee in implementing the mega cultural event.

The sporting activities consisted of free style polo, football, volley ball, cricket, putt shot, bodi dik, and marathon race and so on. There were seven polo teams of which Kosht clenched the polo trophy, whereas Kosht B stood runner-up. In football contest, Kushum secured victory out of the total twelve football teams. Likewise, Chitral Scouts won volley ball cup and Reshun won cricket trophy with Booni as runner-up. The cup of bodi dik went to Shahgram with Raeen as runner-up. Shooting contest with ‘chikit’, and falconry were two other interesting sports that attracted large number of crowd and media personnel. Similarly trophy of marathon race, participated by six youngster teams, went to Kosht team.

All the sporting events were organized in a congenial atmosphere with a display of high sportsmanship spirit to be witnessed by a crowd of as large as 12000 people from all over the Chitral district as well as tourists from and . But there were no foreign tourists participating in the event.

The sporting activities were intermittently disturbed by rain, but it also added color and beauty to the occasion. Full arrangements for tourists’ food and stay were made with tent hotels serving in local cuisines.

The cultural music, folkdances and folksongs were the most interesting phenomenon of the mega event. There was big bonfire for night music program which the participants fully enjoyed. The music of pure Chitral sitar was played by experts of the art. The poets of Anjuman-e-Taraqi Khowar, seventeen of them, came to participate in the poetry session to be organized in the festival venue with the lovely Booni village as a backdrop scene. They recited beautiful poems in appreciation of natural beauty and highlighted the topics of love and friendship with an insight of a poet. Folksongs and folkdances were presented throughout the day with a variety of performers from different regions.

The final day of the festival, during polo interval, Mohyuddin, MNA Chitral and Ghulam Muhammad, MPA Sub-division Mastuj in their public address congratulated the people for organizing the festival. They assured their support for the festival in future. The final day somehow, was marred by rain resulting in the postponement of prize distribution ceremony for the next day at PTDC Booni. The function here was attended by large number of dignitaries from different localities, who distributed trophies and medals amongst the winner teams and individual players. Sikander-ul-Mulk, in his address as chief guest highlighted the importance of the festival and pledged that Jashan-e-Qaqlasht would be organized with great pomp and show by next year, where Gilgit polo team will be invited and the event would be telecast live from Qaqlasht.

There was a large crowd of local tourists to be estimated at more than 12000 people besides visitors from and . But the participation of foreign tourists was nil.

The newly constructed access road to the festival venue, which has been diverted through a suitable place to mitigate transporters’ troubles, is far improved one. It helped reduce the travel time and provided safe journey.

Thus Jashan-e-Qaqlasht was concluded by inculcating the message of love, peace and friendship from the mountainous communities of Chitral, northern