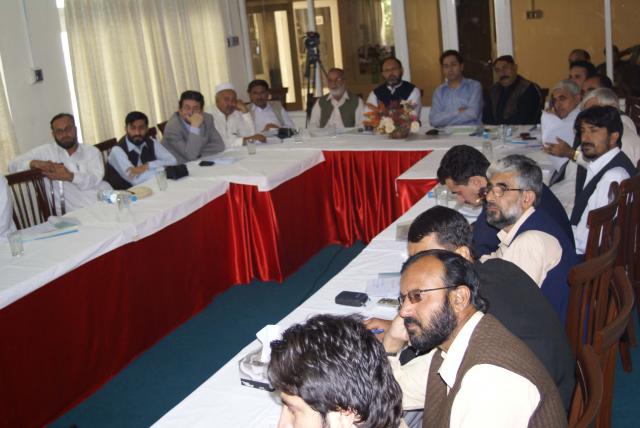 CHITRAL:   Iqra Awards from Qari Faizullah Chitral were distributed among the position holders students of Chitral in annual examination of metric (Secondary school certificate). A simple but prompt function was held at Government Centennial Model High School. District Coordination Officer Rahmatullah Wazir was chief guest on the occasion while the ceremony  was presided over by Mulvi Abudl Rahman Amir JUI and former MPA Chitral. Three position holders were students of private schools while there was no student from government boys schools which show negligence of teachers of government schools. First Award was given to Tosif Ahamd son of Qazi Sharif Ahmad of Broze Public School Broze who secured 895 marks with 40000 cash prize. Second award was given to Nighat Tariq daughter of Tariq Mahmood of Muslim Model School Chitral who secured 882 marks who was given second award and 30000 cash prize while third award was given Ihtishamul Haq son of Asmat Wali of Orien School Booni who obtained 860 marks who was given third award with 20000 cash prize While in government side firs award was given to Ayesha Sultana daughter of Sultan Shah a student of Government Girls high school Moldeh who obtained 827 marks in metric examination who was given first award with cash prize of 40000 rupees, second award was given to Hina Ghani daughter of Ghaniur Rehman of Government girls high school Moldeh with cash prize of 30000 who secured 818 marks while third award was honor to Saima Qayum daughter of Qayum Khan of the same school who obtained 811 marks with cash prize of rupees 20000.  Special award was given to Dr. Akbar Shah surgeon at Khayat Teaching hospital Peshawar who rendering meritorious services to Chitrali patients at KTH Peshawar. An other special award was given to Ataullah student of Frontier Corps Public School Drosh who stood first in Federal Board of Intermediate and Secondary Education. AS well as special award was also given to Mrs Saliha Bebi Head Mistress of Government girls high school Moldeh because three positions were obtained by her school students.

Addressing on the occasion DCO Chitral and EDO Elementary and Secondary Education Chitral Siraj Muhammad Khan stressed on students to read with great zeal and zest and try of their best to show Excellency position in their examinations. EDO expressed his concerned over  that Education department took some stern  steps against defaulter teachers for their reform but they were supporting by some politicians and influential persons of Chitral.   He lamented over cheating ratio and emphasized on student to never try of cheating because there is quantity education but very poor position of quality education in Chitral. He also pointed out that a student of private school stood first but his father is a teacher in government school its mean that his father have no trust on government schools so that why he enrolled his son in a private school. A large number of students, teachesr and  people belonging to all walks of life participated in Qari Faizullah Award cum Iqra award distribution ceremony.

Filed under: Politics, World
Share Tweet Pin G Plus Email
previous article: From Austeritarian Europe: An Interview with Jean-Luc MÃ©lenchon
next article: Most of the improvement and changes in Karnataka state after Mysore