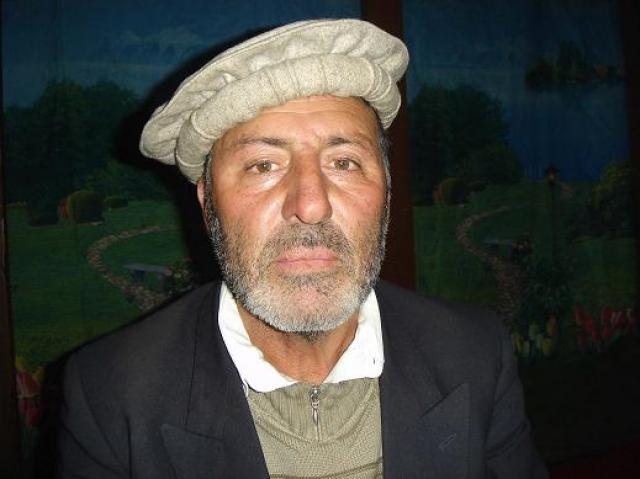 CHITRAL:  Qimat Nazib Beg which is usually known as Gorilla in Chitral. He was born on 15th April, 1955 at Shahgram Tehsil Torkoh of upper Chitral. He passed his matriculation examination from Government High School Shahgram Torkoh and joined Pakistan Army on 6th September, 1972 and passed his intermediate from Army College Murre.  After retirement from government service in 1988 he continued his social activities in the area. He was foster brother of Prince Asadur Rehman and  Qimat Beg was care taker of all of his property at Chitral. Shahzada Asadur Rehman established Pamir Riverside Inn hotel on the bank of Chitral River and Qimat Beg remained its manager for two years. He was also his attorney in different courts cases at Chitral.  Apart of his social life he is also a poet and writer Qimat Baig served Unjumani Taraqi Khowar as treasurer for two years. He remained member of Chitral Club for 10 years and member of Bazmi Khowar for two years. He is still living member of Khowar Qalam Qabeela a local society for promoting of Chitrali Language. A book written by Qimat Beg “ Kehkesha:” will be published very soon which is under process. He is also a best player of Polo and donated his personal polo trained Horse to an other best player of Polo at Kosht (Molkoh). He awarded a very precious rein for horse control which was sophisticated from silver and precious stones to Mambret Ali of Laspur on the occasion of Shundor Polo festival who success scoring a goal during the polo tournament.

AS per his social services Qimat Nazim Beg rendered meritorious services at different parts of the district. He was elected vice president of Hamdard Welfare Society for two years. He also remained president of Cluster comprising on presidents and managers of Aga Khan Rural Support Program t Shahgram Shotkhar and Rich areas. Qimat Beg rendered services for promoting of education and remained  committee member  of Board of  Governors for Government Higher Secondary School Shahgram Torkho. He wrote so many compositions and articles in local media for development and rehabilitation of Qaqlasht a slopping ground near Booni consisting on thousands of Acres of land.

He also struggle for construction of Chitral By Pass road and written  so many compositions, letters and articles in print media. He also wrote letters to different media to attract attention of the authority to declare Chitral as a Peaceful District. As well as he written so many resolutions for awarding Peace award to Chitral district and passed unanimous resolutions regarding establishment of Peace and Justice committee at chitral. Besides it he written a lot about importance, nee and requirement of Lawari tunnel for Chitral people. Qimat Beg passed so many resolutions for establishment of peace committee at Chitral. He highlighted Thoshi goal and Pameer on tourism point of view. He also submitted appeals to Chief Justice Peshawar High court for establishment of a Camp Court at Torkoh to decide criminal cases. Mr. Qimat Nazim Beg is still more active in the age of 55 years as comparative to other ailing overage  Chitral people