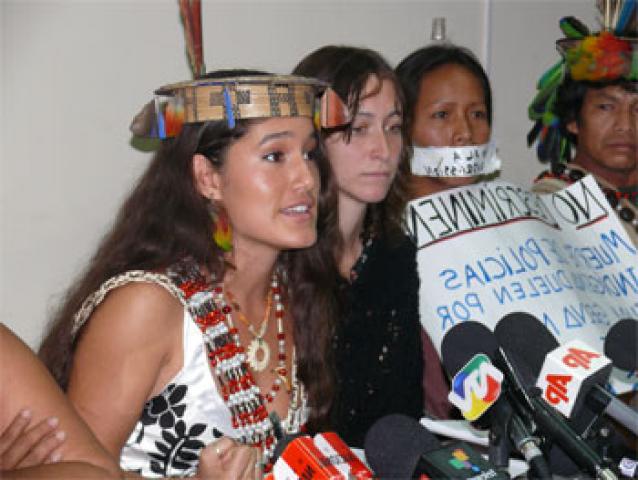 Actress, singer and human rights activist Q’Orianka Kilcher is right now in Peru, where she traveled after hearing of the massacre of Indigenous peoples in Bagua, a city located in the northern area of Peru’s Amazon region.

Indigenous peoples had blocked a regional road to protest government decrees that allow extractive industries in the Amazon forest, and convence the Lima government to repeal them after a dialogue process had failed.

Q’Orianka who is of Peruvian Indigenous heritage, and her mother Saskia Kilcher traveled to Peru to show solidarity with our Native brothers and sisters, and to demand the Alan Garcia government to stop violence and racist policies against our peoples. This was a risky move indeed, in a country like Peru where human rights are not always respected, especially in a time when Indigenous leaders are being prosecuted by the Garcia administration.

After hearing on the news of the Bagua massacre last weekend, Q’Orianka and her mother organized this emergency trip to Peru, bringing help from friends and others who joined their efforts. I had the chance to exchange emails with Q’Orianka and I even asked her to plan this carefully, as I knew that the media in Lima would not treat her respectfully.

As expected, she found in Peru not a warm welcome from the racist media of Lima. At her arrival to the airport, leaders of the AIDESEP Indigenous civil rights organization were waiting for her, but also there were some journalists of the government-controlled media, who attacked her with questions like “Why are you here? Are you trying to make a documentary about this or something?” But she replied “I am here to show solidarity with my Indigenous brothers and sisters of the Amazon”.

The next day Q’Orianka held a press conference at the offices of AIDESEP, whose president Alberto Pizango has been granted asylum at the Embassy of Nicaragua in Lima. Pizango is a good man, an Indigenous teacher of career and a well known leader who has defended the rights of the Amazon people for many years. But the government of Peru wants to imprison him for up to 35 years on charges of sedition, blaming him on the violence ordered by president Alan Garcia in Bagua.

During the press conference, Q’Orianka was bombarded with political questions from aggressive journalists of the Lima press, especially one from Frecuencia Latina – a TV station whose owner is an Israel born Jewish man who owes about $18 million dollars in taxes to the Peruvian government- and they requested Q’Orianka to describe the controversial laws that have caused the Indigenous uprising. They asked her if Alberto Pizango was a corrupted man, and things of that nature. Saskia Kilcher had to step up and protest for the harsh treatment.

“I believe they were not real journalists, but government agents trained to harass Q’Orianka. They had so much hate in their attitude…” said a witness.

That same night most Lima press presented Q’Orianka as a clueless young girl who knew nothing about the conflict in Bagua. In the websites of El Comercio newspaper, RPP radio station and others, racist and xenophobe comments were allowed using all kinds of names to describe Q’Orianka. “She is a fake Indigenous, she knows nothing about Peru, she is just doing this to obtain fame, why does she come here? She is not Peruvian, she is another ignorant Indian, a silly German woman…” and alike. Frecuencia Latina mocked her Spanish, and presented Alberto Pizango as a violent person with images of his face photo covered on red paint.

I have written in my blog Peruanista a note of protest for those websites to delete the offensive comments, but my request has being ignored. I wrote to Q’Orianka and she replied that she is feeling strong and that she is aware of who is behind that hateful treatment, and that it means nothing compared with the love she is getting from the people of Bagua.

Q’Orianka was very emotional during the press conference when saying “I want to know what happened to my brothers and sisters, shame on you Alan Garcia!” almost crying. She was making reference to the hundreds of disappeared bodies in Bagua, where the government says only 9 Indigenous peoples died but some Native leaders say the death toll might be as high as 250 victims.

“I am proud of being Indigenous and I support Alberto Pizango 5 million times, if there is a leader for young Peruvians to look up to, Alberto Pizango is that person…” she said showing pride but also sadness at some point. As a young leader this experience might be a bit hard to digest but she is amazingly doing just fine.

As a blogger I have met amazing people, readers, other bloggers, and public figures whom I interviewed at some point. They all have thought me something. But no one has impacted my life as much as Q’Orianka Kilcher, a brave young woman who believes in what is right. Her work in Peru is causing a great impact and making young Peruvians to value on our Native heritage, and the need to fight for justice and to protect our Indigenous communities and our mother land.

Yesterday I spoke to Daisy Zapata, an Indigenous leader and temporary president of AIDESEP. She said that Q’Orianka visit is very important for the Amazon peoples in Peru “because our president Alberto Pizango has named her our International spokesperson for Peruvian Indigenous peoples. The media in Peru is supporting the government and they are angry at Q’Orianka. But we love her and what she is doing for us…" Zapata added.

So far, the U.S. government has remained silent about the Indigenous massacre of Bagua, even though the current Indigenous uprising was forced by controversial decrees, which president Garcia said were necessary to implement the U.S.-Peru Free Trade Agreement.

Q’Orianka wants to change that at her return to the United States. She wants to talk to president Barack Obama and request him to step up and place on hold the U.S.-Peru FTA. The Peruvian government has failed to comply with this FTA regulations that were supposed to protect Peruvian workers and Indigenous peoples rights, and to assure the protection of the environment.

Today I was glad to read an email from Q’Orianka saying that she was in Bagua with the AIDESEP delegation. She is amazed with the strength of the Amazonian people, after all the suffering they went through reflected in the stories told by them.

As I write this article, I wonder if the government of Peru might try to do something to prevent Q’Orianka from speaking out at her return to Los Angeles. I want the world to be aware of the safety of our sister, and I wish her the best.

If you read this, I want you to know that Peruvians are grateful for what you are doing Q’Orianka, aguila dorada, golden eagle. Hailly pachamama!