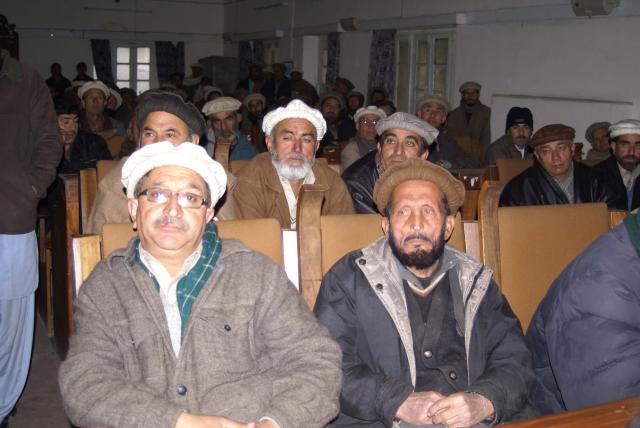 Quran Khwani for the soul of Bashir Bilor at TMA Clhitral.

CHITRAL:  Quran Khwani was held at Tehsil Municipal Administration (TMA) office Chitral for the soul of senior Minister KPK Bashir Bilor who was assassinated a few days back at Peshawar in a suicide attack. Recitation from the Holy Quran was held at TMA main office which was attended by Qadir Naseer Tehsil Municipal Officer, (Engineer Khurshid Azad, infrastructure officer Karimullah (TOR) and all staff of TMA. Students of Madrasa Rahmania Jughor recited the Holy Quran. A function was also held in memory of late Bashir Bilor. Addressing on the occasion the speakers said that he was a honest person and always served for development of our province and nation. They said that he was a brave man practical Muslim and never missed his prayer (Namaz) even on special occasions. They said the late minister visited Chitral so many times and was very interest in development of Chitral. They said that although terrorists killed him but he will be remembers always in the hearts of people At last Fatiha khwani was also held for the rest of deceased soul. All TMA staff and religious persons attended Quran Khwani ceremony.