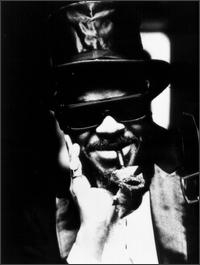 City Bell, Argentina — "That’s what freedom’s all about; learnin’ somethin’ then throwin’ it away." Rahsaan Roland Kirk

One afternoon, about two years ago, I was sitting in my bedroom with a view of a strange, new city, listening to a piece on NPR about dreams and art.  It was a cold day and I’d just moved to Argentina from Baltimore.  This was going to be one of those radio moments, I thought, as the announcer introduced the theme.  Normally, the radio is going in the background, a pleasant distraction, like a conversation between strangers I’m not particularly following.  But every now and then, something comes on that can’t be ignored; a radio moment.  Different from other listening experiences, and made all the more moving and inspiring because of the serendipitous nature of delivery; it’s as if this voice, speaking with notes or words, comes out of nowhere, a gift, a message just for you at the right time and place; even if you’d had that particular song or interview in your collection and could listen any time you wanted, it would never have the same power because, this type of magic can’t be planned.  I sat back in my chair, pumped a fist into the air and opened my ears.

Dreams and art had been a particularly interesting topic; material from the last several in a series of poems and stories I’d written was taken directly from poignant dreams that I’d woken still remembering.  I was especially curious then to see how much of the raw, undigested material from dreams these artists had incorporated in their work.  How much was too much?  Certainly there is a limit, a point beyond which the participant can no longer tolerate mere abstraction and incoherence.  How fortunate then to hear at that moment about people who had directly returned their works, like Orpheus, with varying degrees of success, from the shadows of the unconscious.

The piece opened introducing Rahsaan Roland Kirk, a revered and eccentric jazz musician who died in 1977 while still in his early forties, from his second stroke.  At the ripe age of sixteen, having already played tenor sax professionally for a year, he had a dream that changed his life.  He dreamed he was onstage, leading his own band, playing three instruments simultaneously.  The thing was; he’d never seen two of the three instruments.  (Not that he’d literally seen a thing since he was a young child; he preferred to call himself sightless.)  The next day, he went down to the local horn shop and described them to the puzzled owner.  He left him to root through a pile of old, forgotten horns down in the basement.  Carefully feeling his way through the scraps, he came upon what he’d been looking for: the stritch (a neologism created by Kirk for the relatively rare Buescher alto sax) and the manzello (another term invented by Kirk), a saxello (B-flat soprano sax) which he then modified by enlarging the bell and changing the mouthpiece so he could fit all three in his mouth.  I shook my head in disbelief and envy, imagining the physical logistics.

As I listened, I became struck by the music I was hearing.  Far out, airy sounds, howls, screeches, wild, improvisational solos.  I began to think back on the time in my life when I really started to get into music and playing the guitar.  All I had was a modest ability to listen and a burning desire to create.  Though I’d taken a few lessons and could play a tune or two with my buddy, I still didn’t know the basics or how to read.  Learning the chords or notes and repeating them over and over seemed a stale and lifeless pursuit.  I thought more about the process of making music, and considered improvisation to be its highest, purist form.

In those inchoate days, we were driven to experiment.  With the help of an amp and a guitar, suddenly the world was new.  I realized that anything that made noise could be an instrument.  Any sound could added, tweaked, made to fit the improvisation.  Being from a rural town, my friends and I felt our best playing music outside.  We went to this place we called The Land, a plot of untouched woods on the edge of town where my father was building a house.  We explored the sound making properties of the materials lying around.  One night, we stood on either end of a bundle of rebar propped up by two railroad ties.  We jumped up and down and the slim steel came fast in short wavelets; sounded as loud and piercing as a train rolling past.  We trickled gravel from the top of an unfisinhed concrete wall so that the stones would rain down over the tiny, smooth pieces of metal sticking out; sounded like a plucked Ruan or a bizzare harpsichord.  We gathered in circles and used our voices to make sounds; animals, trains, cars, whistles; and then brought them back to the same wavering pitch, like a bunch of chanting Tibetan monks.  Some of the girls with us laughed and teased but we didn’t care; we were having fun.

And somehow, in the midst of all my earnest yet confused longing to jam and be a great musician, something happened that changed my life; I stopped playing the song we were rehersing and started playing my own thing.  I’d hijacked my step-father’s ’77 Les Paul Deluxe from the attic, dusted it off and headed out for The Land.  My friend and I set up a generator and plugged in so that we were facing the mountain.  We started jamming for a while and then I fell into a sort of trance.  It was as if my body was an empty vessel and an energetic stream I had never felt entered.  I was not frightened by it or ecstatic; I was calm and aware.  And yet everything was different.  Finally we stopped and my friend said, “Holy Shit!  What just happened to you?”  We laughed and I shrugged.  Words would have only ruined it.  Music was faster, deeper, like wading through the deep, tranquil pools of a dream.

Born Ronald Theodore Kirk, he’d seen the transposed letters of his first name in such a dream, Roland, and immediately took it up.  Later, in 1970, another vivid dream came to him, bearing the new name, including spelling, he would come to be known by, Rahsaan.  But these acts were only minor idiosychricies in the larger framework of a deeply creative, mercurial personality that predictably drew both dismissive criticism and earnest respect from within the fairly staid milleau of jazz purists of the day.  Certainly there was more at play in Kirk’s music than a refusal to compromise.

Besides being blind, he was a fluent polymath of reed instruments.  With three horns wrapped around his neck, he also played flute, nose flute, whistle, trumpophone, flexaphone, slidesophone, harmonium, piccolo, English horn, clarinette, not to mention having some big percussion on hand like a set of typanies or a gong.    He was a proponent of circular breathing; once in Germany he purportedly played a two and half hour solo without taking a discernable breath; and developed techniques of talking or singing into his instrument while playing.  He sang, shouted, skatted and generally raised up the level of his performaces to a ferverish pitch.  He frequently insulted ignorant or unresponsive audiences and upstaged fellow players with his virtuoso improv and his intimate knowledge of and respect for the history and progression of “black classical.”  Critics called him a showboat and a novelty act.  Audiences didn’t know exactly what to make of him.  Other musicians wondered, and one can sympathize, how to follow such an act.

In tune with his place and time, Kirk also did not shy from seasoning his performances with his radical politics.  A supporter of the Black Power movement of the late sixties and seventies, Kirk openly criticized, along with many others, what he saw as the usurpation of black classical music by white musicians who, by slightly modifying the blues, Jazz and rock without the proper acknowledgment of their origins, were making money and getting famous while similar African American musicians were being consigned to obscurity and poverty.  In the early seventies, he was even arrested and held in jail for three days for attempting to hijack an airplane.

But behind all of the histrionics of his irreverent life and music, there was a solid, unmistakable foundation of genuine expression.  Bright moments, he called them.  I understood, on some level, what he meant by this.  I’d had my bright moment too and was having my radio moment, but it was not like I saw something of myself in him.  I wasn’t a part of any overt political movement.  I’d given up long ago on hopes of a career in music.  I’d had my occasional moments of inspiration and joy at playing.  But I never worked out a way temper my enthusiasm with the necessary drudgery of practice and the seemingly constant headache of dealing with other musicians.  In the end, I just didn’t have the dedication.  Life had opened up other doors and I had entered.

It was evident to me then, in the spontaneity and sheer playfulness of the words and music I was hearing, he was not stumbling over or trumpeting his sightlessness.  This was not a man who was an otherworldly intuitive, as some people had claimed.  If anything, he had to work harder, longer and better than anyone else around him.  And here was where my real admiration for him began: after all of the excruciating, humiliating labor, he never lost his sense of wonder; with sound, with music, with the universe.  He didn’t fly off in the clouds with the avant-garde, nor was he drug into a rut by the traditionalists.  He searched with spirit to know more.

I thought about Kirk, his visions and his pretensions.  Was he an Orphean hero, a charmed traveler to Hades who had so pleased the gods with his musical gifts he was permitted to snatch Eurydice from the jaws of death, only to lose her on his return by looking her in the face?  Perhaps he was not a hero but a hand, reaching across from the darkness, bearing gifts.  The trick of it, he was saying, is to keep open but stay rooted.  Don’t let your dreams make you blind.