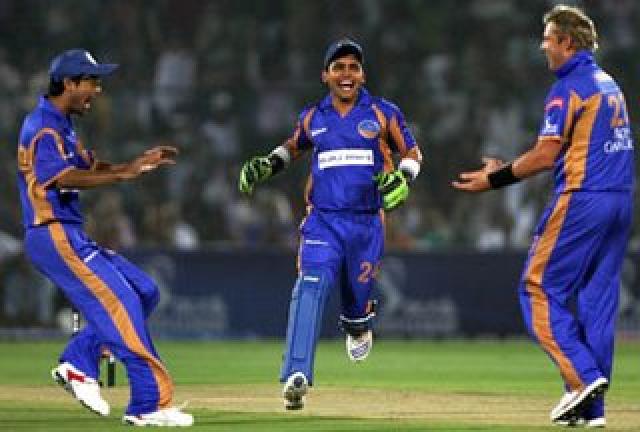 It is all over for Kolkata Knight Riders. For the Shah Rukh Khan-owned side the inaugural DLF-Indian Premier League is almost over though it has two more matches left.

Diehard supporters may come up with many permutations and combinations that could keep the side’s chances of a semifinal berth alive but the reality is that Shane Warne and his Rajasthan Royals has ensured the elimination of Sourav Ganguly’s Knight Riders.

The Kolkata side will now play for minor places in this Twenty20 competition.

The two also put on an 81-run unbroken partnership for the fifth wicket in just 40 balls. This association also improved the IPL record of 69 runs for the same wicket established by Shane Watson and Ravindra Jadeja against Kings XI Punjab.

Then Shane Watson was bowled by Ganguly for 19 (15b, 2×4, 1×6), but Kaif and Pathan made sure the ninth victory lifted the side into the semifinals.

Filed under: Sports, World
Share Tweet Pin G Plus Email
previous article: Antimicrobial Personal Care Products and the Ecology – a Penalty in Cleanliness
next article: American Consulate yet to get land in city