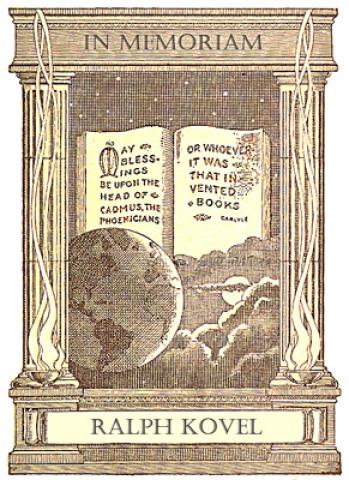 Ralph Kovel, one of the foremost specialists in antiques died last week after a short illness. Kovel worked with his wife, Terry, to produce his most lasting work, a yearly guide to pricing antiques called "Kovels’ Antiques and Collectables Price Guide."

Ralph and Terry Kovel have been at the forefront of the antiques world since their newspaper column, "Kovels: Antiques and Collecting," was first syndicated in 1954; the column still runs in more than 150 newspapers. The couple has made numerous TV appearances, authored entries in encyclopedias and co-authored 97 books over the course of their careers.

The couple began a monthly newsletter in the mid 1970s which now has 50,000 subscribers. They maintain a detailed website that has millions of visitors per year.

Ralph Kovel also served on the board of trustees for the Cleveland Pops Orchestra, Western Reserve Historical Society, WVIZ-TV and WCPN-NPR where he won numerous awards for his work in public service and television.