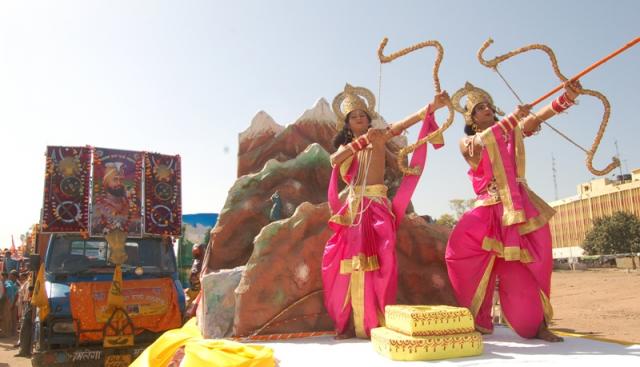 March 24, (Scoop News) -The Mayor of Indian capital Delhi, Kanvar Sen on the eve of Ram Navmi said that Bharat is a spiritual country. The whole life of lord Ram devoted to mankind. It is very unfortunate that the construction of in Ayodhya is being questioned in the land where everybody worships lord Ram, he added.

Speaking on the occasion, Sen Kanvar said that the teachings of Ramayana are not for any particular cast, creed or religion but for the humanity of the universe. He also announced that the Ram Mandir will be constructed soon in Ayodhya, the pious birth , destroying all barriers.

Earlier The procession of  Ram Navami was arranged with great zeal under the guidance of Indraprastha Vishva Hindu Parishad by Hindu Parva Samanvaya Samitee and other religious, cultural, social & educational institutions of . More then 201 Jhankis & Bhajan Mandalis were decorated by devotees. Jhanki of Bhagwan  Ram showing crushing the demons was worth seen. Office bearers of the different institutions were seen with saffron turban (Bhagva shafa) in an open jeep preceeded by the  Hanuman Dhwaja (flag) and followed by well decorated 21 horses and 51 odd bikes with band parties playing Sri Ram Dhun, singing and dancing.

Yatra was started at 2.30 p.m. from Ram Leela Maidan and ended at Gangeshwar Dham Karol Bag. Thousands of People gathered at various places such as , Dariya ganj, town hall, to welcome the Yatra.