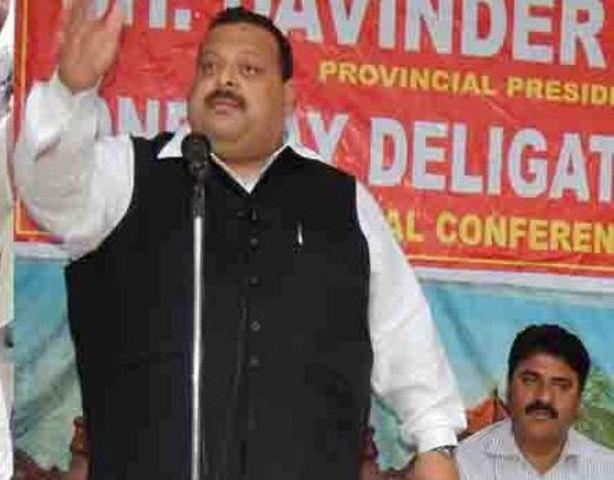 Ashar (Banihal),Jammu, June 12 (Scoop News)-Saying the people of Jammu and Kashmir had a right to know the genesis of devastating 2008 Amarnath land row agitation, Provincial President  Devender Singh Rana on Wednesday hit at People’s Democratic Party for its evasiveness over the core issue in order to hoodwink the public opinion and to wrap under cover the sinister conspiracy hatched with communal Bharatiya Janata Party during most testing times last decade.

Addressing a workers’ meeting at Ashar this evening, Mr Rana posed a direct questioner to the PDP leadership with a hope to let the truth come to fore. He warned PDP to get prepared for a public trial for the omissions and commissions they carried out to plunge the state into political uncertainty with a sinister plan of dividing it on communal and regional lines.

“Avoiding answer to the charges is a candid admission of PDP’s role 2008 agitation”, Mr Rana said while dismissing the vague defence being advanced by its picnic political non entities, who, he observed, had no connect with the people and the ground realities. He said by indulging in mudslinging—the core of PDP’s existence—the party cannot escape the responsibility of follies against the people of the state.

Provincial President said the PDP leaders who met with BJP leaders in New Delhi to work out the anti-people plan conspired to grab power disregarding the welfare of the people of the state. “Isn’t it a fact that PDP wanted to dislodge Ghulam Nabi Azad government to take political revenge of ouster of Mufti Sayeed in 2005”, he said adding

that the broader objective was to fall in line with communal elements to trifurcate Jammu and Kashmir on regional lines.

He said that PDP worked out the contours of conspiracy in the meeting organised by a Jammu based BJP leader in Delhi. “They succeeded in plunging the state into disaster and polarising the situation temporarily but ultimately they had to take a humble pie when people of both the regions saw through their nefarious game-plan”, he maintained.

The Provincial President said that the communal and regional politics has no place in a diverse state like Jammu and Kashmir and cautioned the people to remain vigilant against peace inimical elements who can create 2008 like situation for furthering their political designs.

Mr Rana reiterated the commitment of National Conference to the vision of a vibrant, progressive and united Jammu and Kashmir, saying these distinct characteristics have to be guarded at all costs. He pledged that his party will stand like a solid rock to frustrate and foil the machinations of divisive forces that are creating impediments in road to development and progress.

The Provincial President referred to visionary steps taken by the Chief Minister Omar Abdullah in steering out the State to political stability and heralding an era of peace and tranquility. These efforts have transformed the political and economic landscape of Jammu and Kashmir and helped in creating atmosphere conducive for the growth of

young people. He also referred to several revolutionary initiatives taken for assuaging the urges and aspirations of youth by creating ample opportunities of employment.

Urging the people to strengthen National Conference for achieving the cherished objective of peace and holistic development of the three regions and their sub regions, Mr Rana said a significant headway has been registered in this regard during the past four and half years in different sectors. He spelled out in detail the achievements registered in different sectors and said that the efforts of the Chief Minister have fructified in the empowerment of the people in decision making with the Panchayati Raj becoming a reality, which stand guarantee for safeguarding their interests. He also referred to the Right to Information Act which gives the people right to ask from anyone and everyone, howsoever big he may be, in the government.

Speaking on the occasion, senior National Conference leader Sajjad Shaheen lambasted PDP and described it as a party of dream merchants who were selling the dreams and have no programme and policies for the people of the state. They are just befooling the people. He said they are hoodwinking people by raking up non-issues and creating passions.

He lauded the role of the coalition government led by Omar Abdullah in launching holistic development of the remote and far off areas. Shaheen also projected local issues and sought engagement of local work force in the construction of railway line and four lanning of the Jammu-Srinagar National Highway.

Filed under: Politics, World
Share Tweet Pin G Plus Email
previous article: Privacy Compromised all over the world
next article: The Perfect Recipe for a Telly Award: EpiCURE with Chef MDs