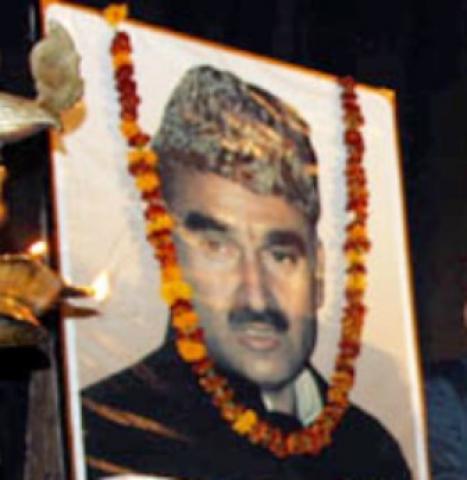 Jammu, November 18 (Scoop News)–Davinder Singh Rana, Political Advisor to J&K Chief Minister Omar Abdullah today in the function of Pt. Prem Nath Bhat Memorial Trust,.lauded the role of non professional and free lance journalists who serve as opinion builders on different issues, by writing freely without any constrain of the interest of employers.

Davinder Singh Rana, who was the Chief Guest on the occasion, paid high tributes to Late. Prem Nath Bhat, a leading advocate at Anantnag in Kashmir and a free lance non professional journalist. He described Late. Pt. Bhat as humanitarian- pat excellence, a patriot and a secularist to the core, having wide circle of friends and admirers belong to various walks of life and to different communities as well as having different political affiliations.

He also laid stress on the social responsibility of the media and advised the fraternity to avoid sensationalism while at the same time being objective, fair and fearless in their writings.

Earlier giving back ground of the award, Sh. Yash Bhasin Convener of the award giving function and Senior trustee P.N.B Trust stated that Prem Nath Bhat Memorial Amateur Journalists Award was instituted in 1990, jointly by Jammu Panorama, the magazine which he owned and edited and Prem Nath Memorial Trust, to enliven the memory of Late. Pt. Prem Nath Bhat, who himself was a non professional journalist while professionally being an advocate.

Mr. Bhasin stated that some of the writings of Prem Nath Bhat published much earlier, about the coming violent scenario in Kashmir proved prophetic. Although Prem Nath Bhat’s writings on various topics appeared in daily newspapers and periodicals in J&K and in the country, he was a regular columnist in Jammu Panorama, to which he had contributed over 100 write-ups.

He said that Prem Nath Bhat was assassinated by the religious fundamentalists, the anti national and anti social elements, on December 27, 1989, at Anantnag. He was eliminated by the terrorists whom his writings, strongly deploring the cult of violence secessionism and communal brotherhood were unpalatable.